The KBO’s top closers are no longer saving the day

The KBO’s top closers are no longer saving the day

It’s not only home runs that are proving unusually elusive in the KBO this season - the league’s closers are struggling to pick up saves. 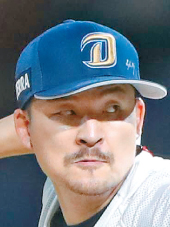 The number of saves has really started to slow this year. In fact, for the first time since 2010, we may not see a closer pick up more than 30 saves this season.

During the 2010 season, Lotte Giants pitcher Son Seung-lak picked up 26 saves while playing for the Nexen Heroes. That was the last time that fewer than 30 saves was good enough to top the league. After the 2010 season, Oh Seung-hwan, who now plays for the Colorado Rockies, raised the bar by picking up a KBO record of 47 saves in 2011 for the Samsung Lions.

Then, once the KBO expanded the number of games per season to 144 in 2015, the average number of saves for the top closer was 35.25. Last season, Jung Woo-ram of the Hanwha Eagles took the save title at 35.

But this year the closers are off pace.

Cho Sang-woo of the Kiwoom Heroes is the current leader in saves, at 18. As the season hasn’t reached the halfway point, it seemed like Cho would easily reach 30 saves but a sudden injury has forced him to take a break.

Due to a shoulder injury, Cho was excluded from the roster on Monday and is expected to miss about a month of action. As shoulder injuries can be lethal for pitchers, it may take longer than a month, and even when he does return to the mound, it is uncertain whether he’ll be able to continue at that level.

The NC Dinos’ Won Jong-hyan is ranked second in saves at 17 and is continuing his season without any injuries, but he’s proving inconsistent. Throughout the month of May, Won picked up four saves in 11 games but had a disappointing 6.35 ERA. Then, in June, as of Tuesday’s game, Won picked up two saves and two wins but still has a pretty high 4.76 ERA.

As Won has only recently recovered from cancer, the summer is likely to be a challenge for him as the extreme heat takes a physical toll on everybody.

Recently, the Doosan Bears’ Ham Deok-ju, one of the youngest closers in the KBO, lost his position as the Bears’ closer. Last season, Ham was the only one of four pitchers who picked up more than 20 saves to have his ERA below 3.00. Then, he set the Bears’ new record in saves for left handed pitchers, at 27.

But Ham’s 2019 has proven to be a different story. Once considered to be one of the best closers in the KBO, Ham has been sent down to the Futures League once already and has been reassigned as a relief pitcher.

Although it’s temporary, Bears manager Kim Tae-hyung has been rotating the role of closer between Lee Hyoung-beom and Kwon Hyuk. It is still unclear when, or if, Ham will return.

But it’s not only Ham who missed his spot as a closer this season. The Giants’ closer, Son, has been replaced after three blown saves at the beginning of the season. His reassignment is a little more disappointing as Son is only 11 saves away from tying the league’s all-time career save record, at 277, set by Oh.

The SK Wyverns’ Ha Jae-hoon and LG Twins’ Go Woo-suk have been closely chasing the lead, at 14 and 12 saves respectively.

Yet as the two pitchers are only playing their first seasons as closer, it is uncertain whether they’ll be able to continue their performance throughout the second half of the season.

Jung from the Eagles - last year’s No. 1 - is struggling. Jung has just picked up his 11th save of the season, much lower than the 21 he had picked up by this stage last year. Despite Jung’s struggles, he did pick up his 150th career save against the Bears on Tuesday.

In addition to saves, Jung became the youngest player in KBO history to play their 800th game on Tuesday.