Brooks Koepka brought his A game to Pebble Beach, California, on Sunday, hoping it would be good enough to make history. 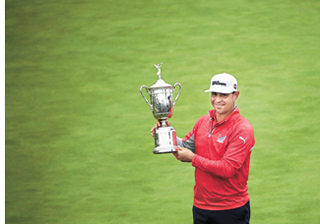 Gary Woodland poses with the trophy after winning the U.S. Open at Pebble Beach Golf Links in California on Sunday. [AP/YONHAP]

But even his A game wasn’t enough to slow down the magic show Gary Woodland was putting on behind him.

Koepka’s round of 3-under 68 left him three strokes short of Woodland, who stopped Koepka’s quest to become the first player since 1905 to win three consecutive U.S. Opens.

Koepka did make history by becoming only the fourth player to break 70 in all four rounds of the U.S. Open. Only problem - 10 minutes later, Woodland became the fifth, thanks to a par save courtesy of a chip off the 17th green that nearly went in, then a 30-foot birdie on 18 for the final dagger.

“Gary, he played a hell of a round today,” Koepka said. “All props to him.”

Indeed, props go to Woodland for holding off Koepka, who made an all-world par save - first from the gallery, then the thick grass in a barranca fronting the second green - and followed that with three consecutive birdies that pushed him to 11 under, only one shot off the lead.

It was quite a ballgame, but it didn’t go back and forth.

Even after a front side of 3-under 32, and even after stuffing a wedge on No. 11 to 10 feet for a birdie to get to 11 under, Koepka could not grab the lead - not even for a second.

Koepka missed the fairway on 13, 14 and 15 and saved par each time, but there was no piercing-perfect gap wedge, a la 10th hole at Bethpage two months ago, and there was no holding off Tiger Woods and all those cheers, a la Bellerive last year.

Instead, it was Woodland putting together the shot-making clinic.

His 3-wood from 263 yards out on the par-5 14th set him up for a birdie that gave him a two-shot cushion, and would’ve been the shot of the tournament had it not been for the shots he made from the greens - one with wedge, the other with putter - on 17 and 18.

It put Koepka in a tough situation at the end.

He was 227 yards from the pin on the par-5 18th and needed eagle to have any chance.

“Kind of an awkward number for me,” he said.

His 3-iron flew past the hole and landed over the green in a tricky lie near the back. He stubbed the chip, then barely missed the 9-foot birdie putt that would’ve put him at 11 under.

And though Koepka will have to wait another month before going for major No. 5, at the British Open at Royal Portrush, his resume didn’t take too bad a hit.

His line in the majors this year: one win, two second-place finishes.

It remains one of the most dominating stretches of golf in a while.

When this close call was over, Koepka finally took some time to reflect on the history he almost made.

“When I was done on 18, you kind of realize, ‘Wow, I was just that close,”’ Koepka said. “But I wasn’t able to get it done. I don’t think anyone in the world played as well as Gary did today.”

At this year’s U.S. Open, three Korean golfers - An Byeong-hun, Lee Kyoung-hoon and Kim Si-woo - competed but only An made the cut. An finished the tournament tied for 16th at three under par, 281.