Red Velvet returns with a touch of magic: The ‘Summer Queens’ are back in time to heat up the charts with ‘Zimzalabim’

Red Velvet returns with a touch of magic: The ‘Summer Queens’ are back in time to heat up the charts with ‘Zimzalabim’ 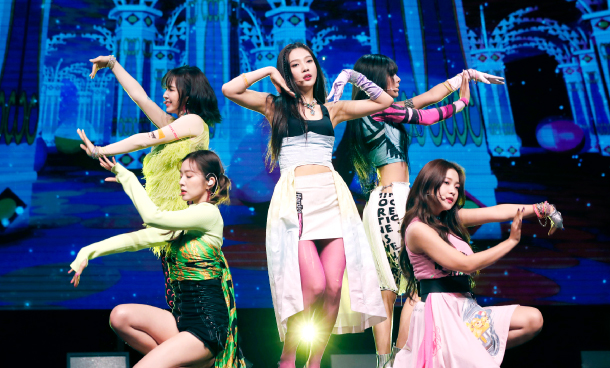 Girl group Red Velvet performs “Zimzalabim” at the album showcase for its new EP “‘The ReVe Festival’ Day 1” on Wednesday in Yongsan District, central Seoul. “Zimzalabim” is taken from the phrase “Simsalabim,” the equivalent of “Abracadabra” in some European countries. [NEWS1]


Fans call them “Summer Queens,” and this year, Red Velvet’s not planning to disappoint.

The girl group returned to the Korean music scene Wednesday with its EP “‘The ReVe Festival’ Day 1.” It was the group’s first release in Korea in seven months - the group was busy with concerts in North America and Japan earlier this year.

“Zimzalabim,” the lead track off the new six-song EP, is the summer hit that fans have been waiting for. For the past two years, Red Velvet has earned the title “Summer Queens” for topping charts with catchy and energetic songs - in 2017 with “Red Flavor” and “Power Up” in 2018.

“Zimzalabim” is a dynamic and experimental song written by Daniel Caesar and Ludwig Lindell, the producers behind “Red Flavor,” which encompasses a variety of genres from electronic dance music to gentle ballad. The song name comes from the phrase “Simsalabim,” the equivalent of “Abracadabra” in some European countries, including Sweden and Finland. While the lyrics are about achieving one’s dreams, the group chants “zimzalabim” multiple times throughout the song, as if the members were casting a magical spell.

“The word ‘zimzalabim’ was really new to us, but as we sang it became really addictive,” said Seulgi during an album showcase in central Seoul on Wednesday. “The choreography includes a lot of big movements and requires a lot of energy.”

“If I could have a wish come true now it’s that we would have more strength to perform this song,” Irene added.

Just as “Zimzalabim” incorporates a lot of different sounds, the dance takes inspiration from diverse influences as well. Parts of the choreography seem to come straight from Bollywood, as the members move their hands gracefully in the air to match the song’s percussion.

“The song was ready a few years ago, but executive Lee Soo-man chose it as the lead track for this album, saying that we would be able to pull it off now,” Joy said.

“When we first started Red Velvet and tried new genres, it was a bit overwhelming,” admitted Wendy. “But now, it’s a refreshing and satisfying feeling to try new challenges.”

Besides “Zimzalabim,” “‘The ReVe Festival’ Day 1” includes the songs “Sunny Side Up!,” “Milkshake,” “Bing Bing,” “Parade” and “LP.” Although the members of Red Velvet didn’t make any official contributions to the songwriting for this album, they still expressed hopes their time would come.

“A lot of amazing people worked on this EP,” said Joy. “I feel like the barrier of entry is really high [to working on our albums], and we still have a lot to learn.”

“I tried hard to contribute lyrics, but it’s difficult to meet up to the company’s expectations,” added Yeri. “I believe that we will eventually be able to.”

Having officially kicked off its domestic activities with “‘The ReVe Festival’ Day 1,” Red Velvet said it still has a lot to show for the rest of the year. According to the group, two more albums from “The ReVe Festival” series will come out by the end of the year.

The group also plans to hold a concert in the upcoming months, although no dates have been set.