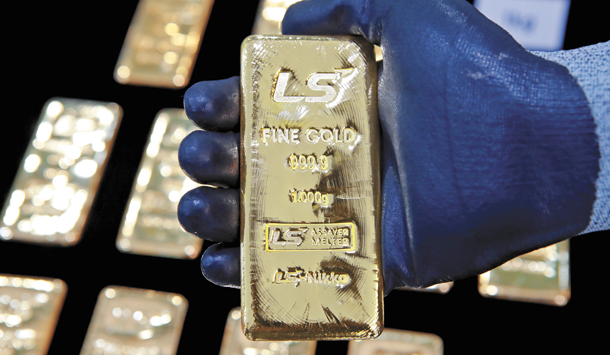 With concerns about the economy on the rise, demand for gold has increased.

Gold futures, which have been traded on the Korea Exchange since March 2014, recently hit an all-time high while transaction volume continues to grow.

The recent global gold frenzy may have kicked off in Korea. The spark was Bank of Korea Gov. Lee Ju-yeol’s comment on possible redenomination in late March. 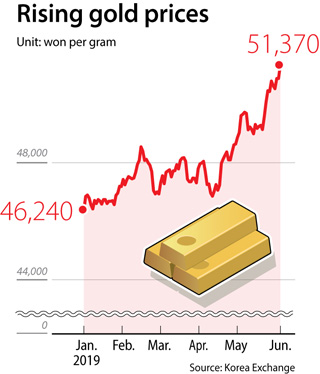 In reporting to the National Assembly’s Strategy and Finance Committee, Gov. Lee said it is time to start discussing redenomination.

With fear of rising inflation and the currency value falling, investors started to increase their investments in gold.

The central bank immediately tried to walk back the comments, releasing a statement that what the governor said was only hypothetical - it seemed to have an effect.

But other news rekindled the panic. The bank reported that the gross domestic product (GDP) contracted 0.4 percent in the first quarter compared the previous three months, worse than its initial estimates of 0.3 percent. That was in mid April.

Banks were flooded with calls on gold purchases.

“Older people were especially discouraged, and they were negative on the economic outlook,” said Jeong Woo-sung, head of the private banking team at the Shinhan PWM Bundang branch in Gyeonggi. “Many of them were asking if they can purchase gold.”

The situation was much the same at other private banking centers.

The older generation’s lack of trust in the government’s economic policies helped fuel the growing demand for gold.

Out of gold bars

While demand is rising for bullion, banks are having trouble with supply, as they didn’t expect such a sudden rise in interest.

“Previously, when a customer orders bullion, we were able to hand it to them in three days,” said Kim Young-ho ahead of KEB Hana Bank’s Club1 PB Center. “Recently, it takes us about a month to deliver.”

The Korea Gold Exchange and Samsung Gold Exchange supplied twice the amount of gold to financial companies in April compared to March. But in May, the supply more than tripled.

But in May, the price of bullion didn’t rise sharply, largely thanks to the stability of gold demand in the global market. Korea was the only country in the world where demand was rising.

Financial companies were able to meet the demand thanks to imports.

The slight increase in May was largely the result of the weakening won against the dollar. At the end of May, while international gold price increased 0.6 percent, the gold price in Korea rose 7.1 percent.

But the gold price really started to pick up in June as the international gold price rose. As of June 14, 1 troy ounce of gold, which equals 31.1 grams, traded at $1,353.8. In just two weeks, gold prices went up 4.6 percent.

The sudden rise in international gold prices was largely driven by the United States.

One of the reasons was U.S. Fed Chairman Jerome Powell hinting about the possibility of the Fed lowering its interest rates. The lowering of the interest rates will result in more supply of dollars in the market, which results in a depreciation of the dollar value.

Another factor contributing to the rising international gold price is the ongoing trade war between United States and China.

U.S. President Donald Trump on June 10 warned that his administration will levy a 25 percent tariffs on $300 billion worth of Chinese goods.

If he goes through with the plan, the global economy could be hurt.

One study estimates that the global GDP will contract 0.5 percent, or $450 billion, if the United States and China impose tariffs on all goods.

The threat of a deepening trade conflict resulted in central banks buying up bullion. China’s People’s Bank is one example.

“There are reports that Chinese are sweeping up gold at Hong Kong exchanges,” said Park Chi-seok, managing director at Samsung Gold Exchange. “It seems the Chinese rich people are feeling anxious.”

Despite the rising prices, interest in investing in gold continues to go up.

Between April 17 and June 3, there have been 23 gold investment seminars at KEB Hana Bank’s Gold Club PB Center. The bank initially said it had planned 20, but had to open three additional seminars to meet the growing demand from customers.

Samsung Gold Exchange said that while previously most customers were just asking about the price of gold, they are now visiting to actually purchase the metal.

Many are buying 100 grams of gold bars that are valued around 5.9 million won.

As gold prices go up, silver investment is also strong.

International silver prices have dropped since the beginning of the year. This usually happens when the global economy starts to sink, as silver is used by many industries.

But recently, investor interest has increased.

“Two or three weeks ago, at one store, a customer came by on a truck and purchased 1.2 tons of silver,” said Song Jong-il, managing director at Korea Gold Exchange.

Korea Gold Exchange said in May it sold 15 tons of silver - that’s nearly double the 7.8 tons sold a year ago.

While the international price of gold has gone up, it is still far from the all-time record, when 1 troy ounce of gold traded at $1,900 in September 2011 when Greece was facing a sovereign crisis. While the global economy is weakening now, it is not in crisis like eight years ago.

Yet globally, gold investment is growing on fear of a falling dollar.

Daishin Securities estimates a troy ounce of gold to rise as high as $1,500 by the end of the year.

But there’s a possibility that gold price could stabilize when Trump and Chinese President Xi Jinping meet in Osaka, Japan, where the Group of 20 summit will be held.