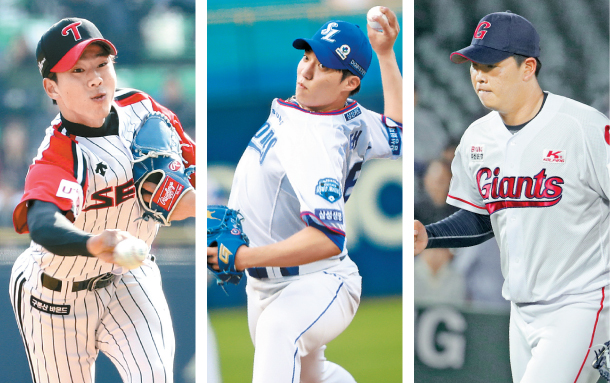 From left: Jung Woo-young of the LG Twins, Won Tae-in of the Samsung Lions and Seo Jun-won of the Lotte Giants throw their pitches. [ILGAN SPORTS, NEWS1, YONHAP]

After precocious outfielders took the league by storm and claimed the top rookie awards over the past two years, the 2019 freshman class in the KBO has been dominated by pitchers.

No position player has stepped up quite the way Lee and Kang did. Since 2010, only two pitchers have won the Rookie of the Year awards, but if current trends hold up the rest of this year, we will likely see a pitcher honored as the best rookie.

Two 19-year-old right-handers - Jung Woo-young of the LG Twins and Won Tae-in of the Samsung Lions - are the front-runners. Jung, a submariner, has gone 4-3 with a 2.28 ERA in 37 games out of the bullpen. Manager Ryu Joong-il picked Jung as the team’s best pitcher in spring training, and Jung assumed a key role in the pen right out of the gate.

Jung doesn’t blow away hitters, as attested by 29 strikeouts in 47 and one-third of an inning, but he’s also limited opponents to just one home run in those innings. The Twins have the second-lowest ERA as a team with 3.45, and their bullpen leads the league with a 3.08 ERA.

Jung is currently the leading All-Star vote getter among middle relievers for the Nanum Team, made up of players from the Twins, Heroes, Kia Tigers, NC Dinos and Hanwha Eagles. No rookie out of high school has ever been voted on to an All-Star team.

Won began the season in the bullpen but pitched his way into the starting rotation. After six relief appearances to begin the year, Won has made 10 starts and has an overall record of 3-4 with a 2.69 ERA. Won has made four quality starts, with at least six innings pitched and no more than three earned runs allowed.

Seo Jun-won, an 18-year-old sidearmer for the Lotte Giants, joined the rotation in late May and has already thrown two scoreless starts, including on June 1 against the Lions when he tossed six innings of three-hit ball for his first career victory. Two starts later, Seo held the Tigers off the board in 5 and two-third innings. His season ERA is 4.64 but as a starter, it’s 3.38.

The last pitcher to win the Rookie of the Year was the Heroes’ starter Shin Jae-young in 2016. The last full-time reliever to be so honored was Lee Yong-chan of the Doosan Bears, who tied for the league lead with 26 saves.