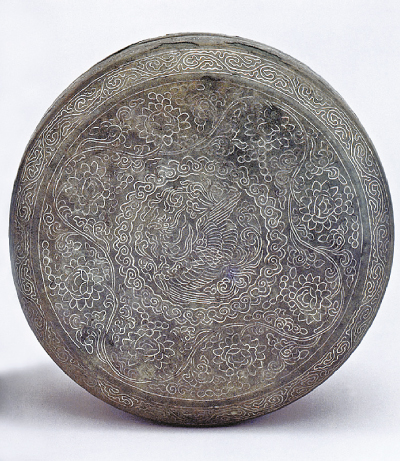 
This lidded bowl from the Goryeo period has a height of 9.9 centimeters (4 inches) and a mouth diameter of 18.3 centimeters.

This type of silver inlaid bowl was popular during the Goryeo Dynasty (918-1392).

The mouth and base have the same diameter, giving the bowl a very stable appearance.

The lid and the edges around the body are shaved and rounded, which is a method widely used in ironware, pottery, wooden boxes and covered bowls of the Goryeo period.

A Chinese phoenix is painted in the middle of the lid with flower and vine patterns around it.

The edges of the vines are silver inlaid.

The classical vine pattern is on the lid and body as well.

The inlaid silver is one of the indications that this bowl was made between the 11th and 12th centuries - a period when silver inlaid earthenware was popular.