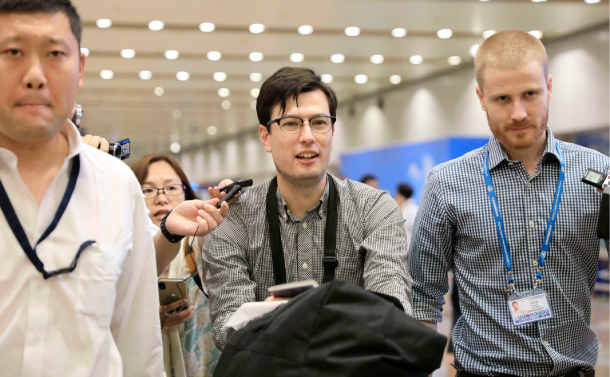 Alek Sigley, the Australian graduate student who was detained in North Korea, has been released and is now “safe and well,” Australia’s prime minister announced Thursday.

“Swedish authorities advised the Australian government that they met with senior officials from the DPRK yesterday and raised the issue of Alek’s disappearance on Australia’s behalf,” said Prime Minister Scott Morrison at the country’s Parliament, using the acronym for North Korea’s official name, the Democratic People’s Republic of Korea. “Early this morning we were advised that the DPRK had released Alek from detention and he has now safely left the country.”

Sigley, who studies Korean literature at Kim Il Sung University in Pyongyang, was last heard from on June 25 on social media, and media reports alleged he had been detained by North Korean authorities on unknown charges.

NK News, a leading outlet on North Korea news that Sigley had regularly contributed pieces to, reported that Sigley had been released to China and would travel on to Tokyo, later on Thursday. Reporters encountered Sigley at the Beijing Capital International Airport, where they asked what had happened to him in North Korea. Sigley replied that he felt “great,” though he remained silent on questions about his detention.

Swedish special envoys visited North Korea on Monday amid speculation that they would seek Sigley’s release on behalf of Canberra, the Australian capital. No confirmation had been made until Morrison’s speech on Thursday, with the Swedish Foreign Ministry saying its visit was part of the country’s regular diplomatic engagement with Pyongyang.

Sweden is one of the few Western countries that maintains a consular presence in North Korea, and is one of the largest contributors of humanitarian aid to the country.

That summit melted the stalemate that had persisted for months between the two parties, and the two leaders agreed to restart working-level negotiations on the North’s denuclearization within a few weeks.

Some media outlets had speculated that Pyongyang could be planning to use Sigley - as well as Kenji Fujimoto, former North Korean leader Kim Jong-il’s Japanese family cook who was also reportedly detained last month - as hostages to prop up its position in the standoff with Washington. Fujimoto’s whereabouts are still unknown after a Japanese newspaper said he was put in custody in Pyongyang for spying on behalf of the CIA. NK News, however, reported last week that Fujimoto could be missing due to illness rather than detention.