HiteJinro sold more than 10 million bottles of its retro version of Jinro soju, less than 10 weeks after the product was released.

First introduced in 1924, Jinro soju is Korea’s oldest soju and the main contributor to HiteJinro’s market leadership. In 1988, the company shifted focus to the Chamisul soju brand, and the Jinro brand continued on with low sales under the Jinro Gold label. 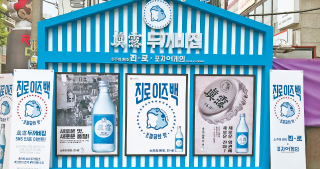 A new retro version of Jinro was released last April. It comes in a glass bottle reminiscent of the packaging in the 1970s and ’80s, when the product was at the peak of its popularity. At the time, Jinro soju was widely called “toad soju,” referring to the toad character on the label, which is now HiteJinro’s symbol.

Adjustments have been made to the product. Following the trend toward low-alcohol drinks, Jinro soju’s alcohol content is 16.9 percent. This is lower than HiteJinro’s Chamisul Fresh (17 percent) and Chamisul Original (20.1 percent).

The product aims to appeal to the sense of nostalgia of older customers and the interest in retro among the young.

The company has opened two pop-up stores, one in Gangnam and the other in Hongdae, and sales have been brisk at both Toad Houses.

“We didn’t expect it to be this successful,” said a HiteJinro spokesman. “But our initial annual sales goal was hit in the first two months, and after one month of release we had to adjusting sales volume to meet demand.”

Success continues. Jinro soju sales in June were four times higher than April, and in July, they were up eightfold from April.

“The ‘newtro’ product was something that only 95-year-old HiteJinro could present,” said Oh Sung-tak, HiteJinro’s senior marketing executive. “Rather than overtly pushing the retro idea, we tried to instill modern interpretations.”