Swimmers dive into the water at the start of the women’s 5 kilometer open water race at Yeosu EXPO Ocean Park on Wednesday. [YONHAP]

Having reached the first split 26th of the 54 swimmers in the final, at seven minutes and 56.1 seconds, Cunha slowly made her way up the leaderboard to reach fourth place by the fifth split.

Cunha took the lead by the seventh split, but dropped a spot by the eighth. Yet in the last section of her race, Cunha sprinted for her first gold in the 5 kilometer race, finishing with a time of 57 minutes and 56.0 seconds, a full second ahead of the silver medalist.

“In the 10 kilometer, I finished and I really wasn’t happy with that result,” Cunha told FINA. “Today, my strategy was to swim a bit more relaxed in the first half. I was behind the girls until the third lap when I started to move up. In the final lap, I just got myself to where I needed to be. In the 10 kilometer with so much pressure for Olympic qualification the girls had a little more ‘fight’ in that race. I’m glad that today’s race was more swimming and less fighting.”

Cunha has a shot at winning a second gold at this year’s tournament as she will be competing in the women’s 25 kilometer open water swimming event tomorrow. 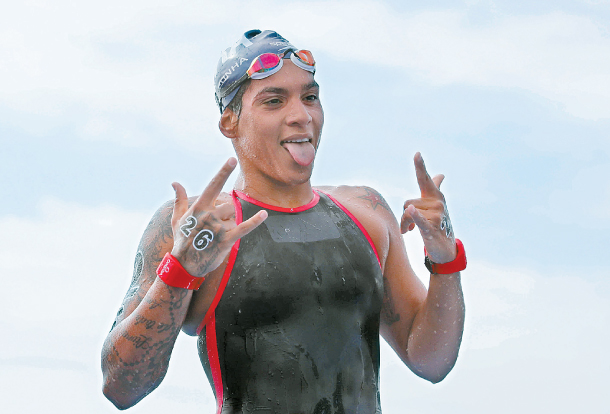 “Anyone can swim well in a 5 kilometer if they have done the training. It was not my best race, but I’m happy with a medal. I want to tell you that I feel so badly for Aurelie [Muller] because she did not qualify for the Olympics in the 10 kilometer. I lost an Olympic qualification in 2011 and I believe I know how she feels. She is one of the best athletes here.”