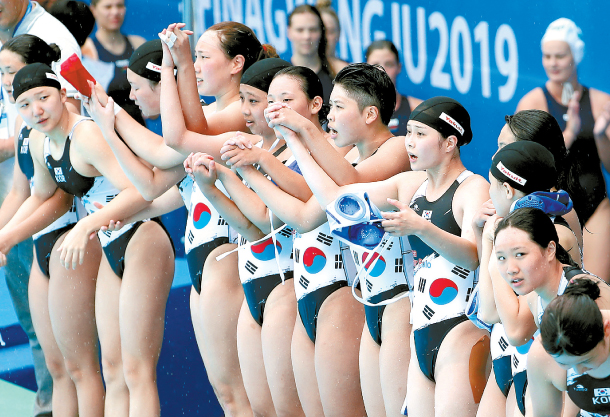 The Korean women’s water polo team express their gratitude after losing to Cuba 30-0 to finish last in the 16-team tournament at the FINA World Championships on Monday. [YONHAP]

After losing their last game of the world championships on Monday, the Korean women’s water polo players shared teary hugs.

No, they weren’t consoling each other because they lost to Cuba 30-0 to finish in last place in the 16-team tournament at the FINA World Championships in Gwangju. They were sad that they now had to go their separate ways — most of them back to school — because, as it stands, the national women’s team will cease to exist. There are no professional or semi-pro clubs that these budding players can fall back on, nor is there a plan to create one.

This collection of 13 players, with a dozen teenagers in the mix, was thrown into an impossible situation. Korea received a spot in the women’s water polo as the host nation, and it scrambled to put together a team through open trials. These former swimmers only started training as a team in early June.

The team was patched together only because Korea had to have one in the tournament. But something funny happened along the way. The sport of water polo changed players’ lives, and they’d like nothing more than to continue playing it.

“Even though we’ve been with each other for a short time, we’ve become really close friends with each other,” said team captain Oh Hee-ji, also the team’s oldest player at 23. “As captain, I want to thank the girls for sticking with this.”

Oh, who was preparing to become a physical education teacher before catching the water polo fever, said she’s thinking of starting her own local water polo club.

“Hopefully, it will help lay the foundation for women’s water polo,” Oh said. “I want to keep playing water polo. There’s something about this sport that I can’t explain. I just love it so much.”

Two of her teammates tried to explain their love for the sport. Kim Ye-jin, an 18-year-old former swimmer, said water polo changed her life.

“I wasn’t that good of a swimmer, and I wasn’t really going anywhere in that sport,” Kim said, choking back on tears. “In water polo, I’ve enjoyed being a part of the team. Everything is team oriented. No one player can do it all. That’s what I like about it the most.”

Kyung Da-seul, the team’s leading scorer with three goals, said she used to be a selfish person before taking up water polo.

“In swimming, I only had to worry about myself and competing in my lane. But in water polo, every player has to be on the same page,” said Kyung, 18. “I started thinking more about others. I experienced the sense of camaraderie that I never had in swimming.”

Kyung recalled how the past month or so of training and competing together brought the players close.

“Think about some ordinary man having to practice for a month and then going up against Lionel Messi on a football field. That’s essentially what we did,” Kyung said. “So whether we wanted to or not, we had to live as a team and die as a team.”