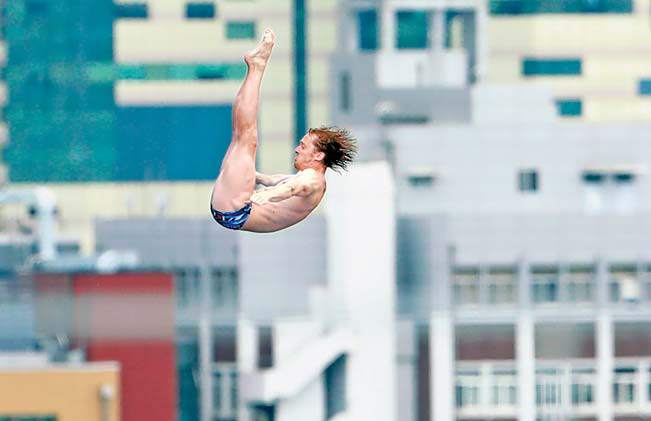 Gary Hunt of Britain performs in the men’s high diving at the Gwangju 2019 FINA World Aquatics Championships at Chosun University on Wednesday. [YONHAP]

Gary Hunt of Britain picked up a thrilling victory in the men’s high diving at the Gwangju 2019 FINA World Aquatics Championships at Chosun University on Wednesday.

But the fourth and final round changed it all.

In the final field of 12 divers, Hunt, who performed 10th, excelled. Performing a dive with a difficulty level of 5.2, Hunt got a perfect score of 156 points to take an exciting come-from-behind victory, finishing a good 8.55 points ahead of the silver-medalist LoBue.

Hunt won the event with a four-round total of 442.20 points.

“It’s hard to explain your feelings straight away after so much emotions,” Hunt said. “In a competition like this, you never know how it’s going to end and I’m still shocked.”

With the win, Hunt picked up his third medal in the event. During the inaugural event in the 2013 World Championships in Barcelona, Hunt won a silver, and in 2015, he picked up a gold. In 2017, Hunt didn’t win a medal.

Defending champion LoBue finished with a silver at 433.65 points followed by Jonathan Paredes of Mexico winning bronze, receiving 430.15 points. This is Paredes’s third World Championships medal as he won a bronze in 2013 and a silver in 2015.

“I’m really excited,” LoBue said. “My heart feels happy. I was really happy that Gary and Jonathan both had really good dives because we’re all competitors and we want to do well when others are doing well. I was happy to be up there with the best in the world and what an honor to represent our country, doing something we love.”

“We are having a lot of competition this year, the level is growing up so fast,” Paredes said. “It’s just an honor to share the podium with these guys and it’s an amazing feeling. I’m super happy and I think I’m going to sleep good tonight.

In high diving, each diver receives a score between zero and 10 from seven panel of judges. For the final calculation, the highest two and the lowest two scores get discarded and the remaining three scores are multiplied by the degree of difficulty of the divers’ dive.

In the women’s event, the female divers jump from a 20-meter high platform while men jump from 27 meters high.