He started the day by winning gold in the men’s 50 meter freestyle. 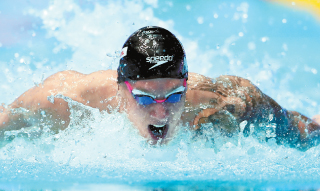 Caeleb Dressel of the United States competes in the men’s 100 meter butterfly final on Saturday. Dressel won his fifth gold at Gwangju in the event. [YONHAP]

Racing in the fourth lane, Dressel sprinted through the short distance to win gold by 0.41 seconds ahead of the silver-medalist, at 21.04 seconds, good enough to set a new championship record.

With that win, Dressel successfully defended his title in the event.

Bruno Fratus of Brazil and Kristian Gkolomeev of Greece won silver by finishing their races at 21.45 seconds. A bronze medal was not awarded.

Shortly after the men’s 50 meter freestyle, Dressel added another gold in the men’s 100 meter butterfly.

Racing in the fourth lane, Dressel got off to a quick start by reaching the halfway point, 50 meters, at 23.09 seconds. He continued to hold his lead in the next half of the race for another gold, at 49.66 seconds.

Dressel defended his title in this event as well. During the semifinals of the event on Friday, Dressel set a new world record and the championship record, at 49.50 seconds.

Then, in his last event of the day - the mixed 4x100 meter freestyle relay - Dressel added his third gold of the day, setting a new world record to win.

Racing in the fourth lane, Dressel started the United States with a lead by finishing his 100 meters in 47.34 seconds. Then, Zach Apple, second swimmer, and Mallory Comerford, third swimmer, continued the United States’ lead. Following those two swimmers, Simone Manuel, the United States’ last swimmer in the relay, successfully maintained the lead for the team’s third straight gold in the event, at 3 minutes and 19.40 seconds.

Since the mixed 4x100 meter freestyle relay was added to the world championships in 2015, the United States has won them all.

Sarah Sjostrom continued her dominance in the women’s 50 meter butterfly.

Racing in the fourth lane, Sjostrom sprinted through the short distance to win by 0.33 seconds ahead of the silver-medalist, at 25.02 seconds.

Ranomi Kromowidjojo of the Netherlands won silver by finishing her race at 25.35 seconds followed by Farida Osman of Egypt winning bronze, at 25.47 seconds.

In the women’s 200 meter backstroke, Regan Smith of the United States picked up her first gold in the event.

Racing in the fourth lane, Smith got off to a quick start by taking the lead in the first 100 meters, at 59.45 seconds. She continued her lead in the second half of the race to finish a good 2.57 seconds ahead of the silver-medalist, at 2 minutes and 03.69 seconds.

With a win, Smith picked up her first world championships gold. She set a new world record and the championship record in the event during the semifinals on Friday, at 2 minutes and 03.35 seconds.

In the women’s 800 meter freestyle, Katie Ledecky of the United States finally picked up her first gold in Gwangju, clocking in at 8 minutes and 13.58 seconds.

With a win, Ledecky successfully defended her title in the event for the fourth straight world championships.

Quadarella won silver by finishing her race at 8 minutes and 14.99 seconds.