Ronaldo did not play, and local agency cries foul

Ronaldo did not play, and local agency cries foul

Italian football champions Juventus breached an agreement when they benched superstar Cristiano Ronaldo in an exhibition match against Korean league All-Stars, a local organizer of the match claimed Saturday.

Some 63,000 fans at Seoul World Cup Stadium went home disappointed Friday night, as Ronaldo did not play in a 3-3 draw between Juventus and K League All-Stars. 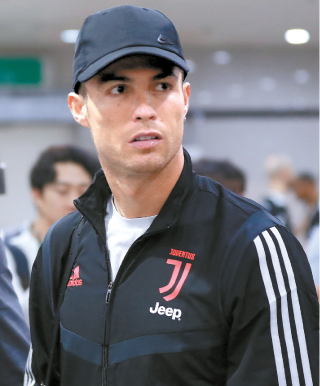 TheFasta, the agency responsible for the event with Juventus, released a statement Saturday claiming that it didn’t know about Juventus’ decision to sit Ronaldo in advance.

TheFasta said the only exception to the playing-time clause would have been an injury sustained during the warm-up or during the match that would have prevented Ronaldo from playing 45 minutes. The K League was also aware of this clause, the company said, and added it will “lodge a strong protest” against Juventus over issues from the match.

“After finding out that Ronaldo’s name was not on the second half squad list, we requested Juventus to play Ronaldo as written in the contract,” the agency said. “The club told us that both the manager and the player know about the clause, but Ronaldo can’t play because of his physical condition. Juventus didn’t respond to our calls later.”

The K League issued an apology earlier Saturday over Ronaldo’s non-appearance on the pitch.

“We sincerely apologize to fans for Ronaldo not playing in the match although he was later found to have a muscle problem,” the K League said. “We’ll pay more careful attention to not disappoint K League fans.”

The K League said it will seek financial compensation from TheFasta.

At the post-match press conference, Juventus manager Maurizio Sarri said he didn’t play Ronaldo because of the player’s muscle problem. But the K League said no one from Juventus or the agency gave prior notice that Ronaldo would not play.

A reporter asked Sarri if he knew about the clause in the agreement on Ronaldo’s playing time, a club official cut in before the coach could answer, and told the press that there was nothing left to say about Ronaldo.

While some fans blame the tight schedule, TheFasta said it was Juventus that decided to go with the one-day plan. Juventus played the match only about seven hours after arriving in Korea from Nanjing.

The exhibition match was supposed to kick off at 8 p.m., but Juventus had their flight from China delayed for about two hours and was further delayed by heavy traffic in Seoul. After resting briefly at a hotel and attending a meet-and-greet event, Juventus players arrived at the stadium at 8:04 p.m., and the match started at 8:50 p.m.

“We expressed our concerns many times about the tight schedule,” the agency said. “We warned that flights from China can be delayed and requested them to arrive in South Korea early. But Juventus told us they were confident they could keep the schedule.”