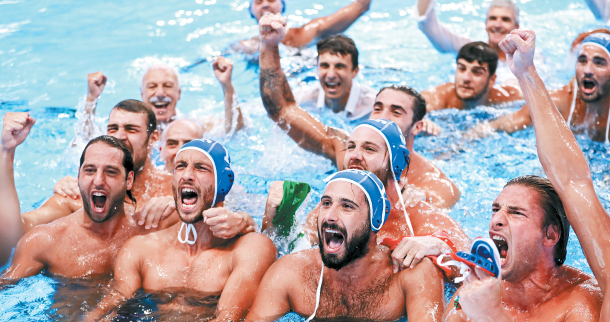 Team Italy defeated Spain 10-5 in the final to win gold in men’s water polo at the Nambu University Municipal Aquatics Center on Saturday.

After finishing the first quarter 2-2, Italy scored three goals in the second quarter to take the lead 5-3 against Spain. Then, by scoring five more goals over the next two quarters while Spain only scored two, Italy won the title, for the first time since the 2011 World Aquatics Championships in Shanghai.

This was the first time since the 1994 World Aquatics Championships in Rome that the two teams played each other in the finals. At that time, Italy defeated Spain 10-5.

Looking at Italy’s streak at this year’s World Championships, they’ve been in solid form. Assigned to Group D, Italy won all three of their matches - against Brazil, Japan and Germany - to advance to the knockout stage.

Then, Italy continued their stride by picking up a close 7-6 win against Greece in the quarterfinals. By defeating Hungary 12-10, they successfully secured their spot in the finals.

In a bronze medal match, defending champion Croatia once again defeated Hungary 10-7. During the 2017 World Aquatics Championships in Budapest, the two teams played against each other in the finals and Croatia defeated Hungary 8-6 to pick up a gold.