Caeleb Dressel of the United States and Sarah Sjostrom of Sweden were named the top male and female swimmers of the world championships on Sunday.

It’s the second consecutive such honor for both at the FINA World Championships. 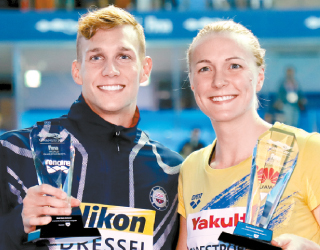 Sjostrom, 25, picked up five medals in Gwangju. She won her third straight world title in the 50m butterfly, while also collecting silver in the 100m fly and 50m free and bronze medals in the 100m and 200m free.

Her bronze in the 200m free was her first world championships medal in an individual race longer than 100m.

With her medals in the 50m and 100m fly, Sjostrom moved into the all-time lead among female swimmers with eight medals in butterfly races. Only U.S. swimmer Michael Phelps has won more in the competition’s history with 10 medals.

The U.S. was named the Best Team in swimming, after collecting 14 gold, eight silver and five bronze medals to lead all countries.