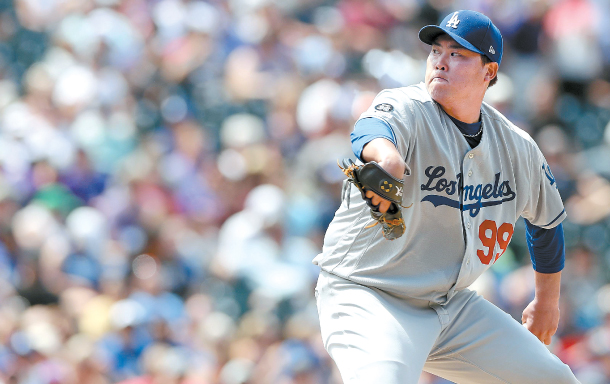 Ryu Hyun-jin of the Los Angeles Dodgers throws a pitch during a game against the Colorado Rockies at Coors Field in Colorado on Wednesday. [GETTY IMAGES/YONHAP]

Ryu allowed three hits and a walk while striking out one over six innings on Wednesday (local time) against the Rockies at Coors Field.

The Dodgers won the game 5-1 as rookie Will Smith slugged a three-run homer in the top of the ninth inning of a 0-0 game. Joe Kelly, the third pitcher of the game, picked up the win.

Ryu remains at 11 wins and two losses for the year but lowered his ERA to the MLB-best 1.66. Ryu tossed 80 pitches, 51 of them for strikes.

The left-hander made an impressive comeback from his worst pitching at Coors Field on June 29, when he allowed a season-worst seven earned runs on nine hits in four innings.

Ryu gave up his first hit of the game in the third inning to Tony Wolters, who tried to score from second base on a two-out single by Charlie Blackmon. But the Dodgers’ right fielder Cody Bellinger threw out Wolters at the plate to end the inning without giving up a run.

In the fourth inning, David Dahl hit a two-out double, and Ian Desmond walked, but Ryu retired the next batter to escape the inning without damage.

Ryu was relieved by Pedro Baez to begin the seventh.

Rockies starter German Marquez also delivered six innings without an earned run, striking out 10 batters and allowing two hits. But he left the game due to an injury in the top of the seventh inning.

Ryu is having the best season of his career this year. Having the lowest ERA in the MLB is just one of his achievements this year. Ryu started in the Dodgers’ opening game and picked up a win, becoming the first Korean pitcher since Park Chan-ho in 2001 to do so.

For May, Ryu was named the National League’s Pitcher of the Month. For that month alone, Ryu had an outstanding 0.59 ERA in six games, picking up five wins and a no-decision.

Then, Ryu became the fourth Korean to earn an All-Star selection and on July 9, made history by becoming the first Korean player ever to start at an All-Star Game. Managers get to select their starting pitchers out of the 12 pitchers picked for each All-Star squad.