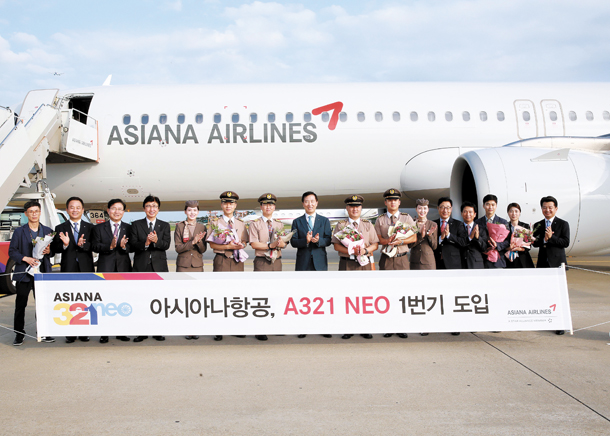 Asiana Airlines announced Friday that it added an Airbus-made A321NEO jet to its fleet, becoming the first Korean company to adopt the fuel-efficient jet.

The new narrow-body jet is 15 percent more fuel efficient than competing similar-sized planes and is quieter, according to Asiana. The plane landed at Incheon International Airport Thursday.

The Airbus jet will start flying in mid-haul routes from Aug 9 including routes connecting Incheon with Taipei, Nagoya in Japan and Clark Field in the Philippines.

Asiana’s new jet comes with 188 seats, with eight being business class and 180 being economy class seats.

The new jet offers a wireless entertainment system, according to Asiana. If passengers download an app, they can use personal devices to enjoy movies and video clips offered on board.

The airline said it will gradually switch its fleet to next generation planes including A321NEO jets for short-to-mid-haul operations and A350 planes for long-haul routes to increase fuel efficiency and maximize profits.

Asiana ordered 25 A321NEO aircraft in 2015. The remainder of the single-aisle jets will be delivered between the rest of this year and 2025.