With the passage of time, coupled with an elbow injury, veteran Korean reliever Oh Seung-hwan is clearly not the pitcher he once was. 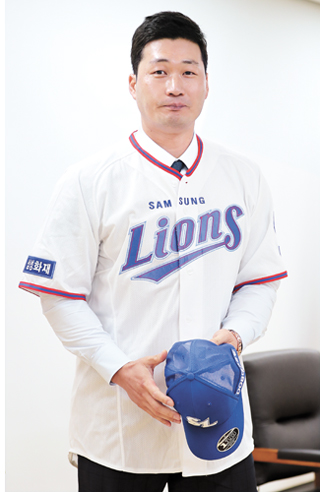 Gone are the days when he could mow down hitter after helpless hitter just with his fastball, whose backspin left an impression that the ball was rising on its way to the plate. Now 37 years old with elbow surgery scheduled on Aug. 23 and his fastball having lost its zip, the right-hander will have to figure out different ways to handle hitters once he returns to the mound in the KBO next year for a second tour of duty.

Oh rejoined his former KBO club, the Samsung Lions, last week, ending a stint in Major League Baseball (MLB) that lasted 3 and a half seasons with three clubs. Oh will first have to serve a 72-game suspension, following his prior illegal gambling conviction, with 40 of them this year and 32 in 2020. Oh is out for 2019 anyway as he is scheduled to undergo an operation to remove bone chips in his right elbow.

Oh made his professional debut with the Lions in 2005 and pitched for the team until 2013, helping them win five Korean Series titles. Six years after he first left the KBO, Oh remains the league’s career leader in saves with 277. He also owns the single season record for saves with 47, set in 2006 and matched in 2011.

And Oh did it mostly with his fastball, and he touched 150 kilometers-per-hour (93 miles-per-hour), the magic number for pitchers in the KBO, with shocking regularity. The lights-out closer struck out 625 in 510 and a third innings while compiling a 1.69 ERA in the KBO and earned the moniker Final Boss.

Oh threw the four-seam fastball 90 percent of the time in the KBO and relied on his slider the rest. Opposing hitters, knowing what Oh was going to offer, could sit on those fastballs, and they still could not hit them.

But in 2013, his final KBO season before joining the Hanshin Tigers in Japan’s Nippon Professional Baseball (NPB), Oh had his lowest strikeout rate in five years. Then in his first NPB season in 2014, Oh threw his four-seamers 70.8 percent of the time and increased his usage of the slider to 21.6 percent. His fastball usage dropped below 70 percent in 2015. Oh still led the NPB’s Central League in saves in both seasons.

Once he took his talent to the MLB and signed with the St. Louis Cardinals, Oh started mixing in more pitches. According to MLB’s Statcast, Oh threw his four-seam fastball at only 61.1 percent rate in 2016, while changeups, curves and sinkers also entered his repertoire.

Oh added a cutter in 2017. And by 2018, which he split with the Toronto Blue Jays and the Colorado Rockies, Oh was only relying on his four-seamers 51.2 percent of the time. The cutter became his second most-used pitch at 30.1 percent.

The gap between the two pitches narrowed even more this year, as Oh offered his four-seam fastballs at a 42.5 percent rate, and his cutter at 38.7 percent. His curve usage rate reached a career-high 14 percent, up from only 0.8 percent in his first MLB season in 2016.

Over the past four years, Oh’s four-seam fastball velocity dipped noticeably, from 93.5 mph in 2016 to 91.1 mph this year. Last year, the number sat at 91.6 mph, 1.8 mph slower than the MLB average for relief pitchers.

And while throwing his signature fastball less often and slower than before, Oh put up his worst numbers across the board this year before the elbow issue ruled him out for the season in July. He walked more, struck out less and gave up more hard contact and line drives in 2019 than any of his previous three years in the majors. Oh served up six home runs in 18 and a third innings this year, after allowing eight dingers in 68 and a third innings last season.

Given his age and recent stats, Oh fits the profile of a pitcher in decline. The Lions still invested 600 million won ($492,450) in the right-hander for the rest of this season even though he won’t throw a pitch for them, and they are expected to offer him even more money for 2020, when he won’t be eligible to pitch until late April at the earliest because of his suspension.

The Lions believe Oh can still be competitive in the KBO with his current arsenal of pitches. If he can come back and keep throwing in the low-90s, that should still put him among the top 20 or so in average fastball velocity in this league.

Oh has been gone long enough that many of the hitters he faced before have either retired or have declined considerably. Others who were fringe players when Oh was around the first time have developed into dangerous hitters. He is not familiar with the current crop of top hitters, but on the flip side, they also are not familiar with Oh, other than from watching him close out games in MLB on television. If Oh can no longer blow his fastballs by hitters, he can still offer them his new mix of pitches that KBO veterans have never seen before.

At his reintroductory press conference with the Lions last Saturday, Oh said he expects to come back even better than before after his elbow operation.

Oh feels all he has to do is go back to the drawing board.

“I’ve been away for six years, and I have to study KBO hitters again,” Oh said. “I can’t tell you right now how often I’ll throw my fastball or breaking balls. I’ll have to pore over data from the team and prepare for the new season the best I can.”