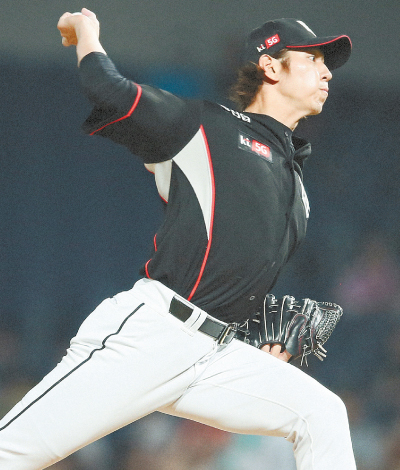 Rhee Dae-eun of the KT Wiz throws a pitch during a KBO game. [KT WIZ]

From a starter to reliever to closer, Rhee Dae-eun of the KT Wiz has gone through three different positions within this season alone.

Having played in 30 games this season, closer seems to be the perfect role for Rhee, as he picked up three wins, two losses and 12 saves with a 4.44 ERA as of Thursday’s game.

“This is the first time to play in three different positions in a single season,” Rhee said. “I’ve been a starter and a bullpen pitcher before, but this is my first time playing as a closer. My goal is to have some fun when playing baseball. I’m having quite an experience in the KBO, in my rookie season.”

After graduating from Shinil High School, Rhee was among the many major league hopefuls. Joining the Chicago Cubs, Rhee advanced all the way to the Cubs’ Triple-A team but never got to make his major league debut.

Once Rhee became a minor league free agent after the 2014 season, he ended his time in the United States and continued his career in Japan, playing for the Chiba Lotte Marines. After playing two seasons, Rhee returned to Korea, playing for the Police Baseball Team, where he also got to fulfill his mandatory military duty.

As the KBO requires major league returnees who have never played in the KBO to wait two years before debuting, it wasn’t until this season that Rhee finally got to play.

From Rhee’s international playing experience, the Wiz set high expectations that he will lead the club’s starting rotation. But once the season started, he failed to meet up to those expectations, picking up a win and two losses with a 5.88 ERA in eight games.

Rhee showed the ability to toss his fastball at 150 kilometers-per-hour (93 miles-per-hour) but his secondary pitch, the forkball, wasn’t as sharp as expected.

He was also excluded from the Wiz’s entry on May 17, due to pain in his right elbow and his back.

The Wiz hoped to finally advance to the postseason with Rhee but his absence didn’t help the club at all, dropping to the second half of the leaderboard in the regular season ranking.

“I’ve had back pain every year,” Rhee said. “It gets stiff because I don’t throw any pitches and focus only on weight training during the winter. Normally, it got better as I pitched more. But once I got to my 30s, it took longer to recover. This year, I kept feeling pain.”

Once Rhee headed down to the Futures League, he recovered by resting and rehabilitating. Then, when he returned to the Wiz on July 12, manager Lee Kang-chul first assigned him as a bullpen pitcher, with the plan to slowly integrate him back into the starting lineup.

However, as he tossed seven scoreless innings in two games as a bullpen, Lee decided to assign Rhee as a closer.

The decision was made six days after he returned to the Wiz.

Although they’re all pitchers, each of the positions has a different way of training and preparing. Due to this, it’s never easy to switch position, especially while in season.

Despite the confusion of continuously changing roles, closer seemed to be just the right position for Rhee.

“Starters have to be able to pitch different types of pitches,” Rhee said. “But I had a hard time with it because I couldn’t control my forkball. Now that I’m pitching as a closer, I can pitch my forkball. Also, since I only have to think about one inning or so, I can concentrate better.”

Having picked up his first save against the NC Dinos on June 23, Rhee already picked up 12 saves, helping the Wiz to keep their chances alive in their first-ever postseason advancement. Since the Dinos reclaimed the fifth spot on Aug. 6, Wiz has maintained their spot at sixth, two games behind the Dinos as of Thursday’s game.

“Rather than a starter, I think being a closer is better for my mental health,” Rhee said. “When I played a bad game as a starter, I had to wait another four or five days until my next start. During that time, I was really stressed because I kept thinking of those bad memories. But since a closer gets to play more often, I get to forget about my previous game quicker. It’s better to prepare for the next game.”

Although Rhee and the Wiz still have some work to do, they are still confident they can move up the ranking for their first-ever advancement to the postseason.

“If we play well, [the team’s] atmosphere gets brighter,” Rhee said. “When we moved up to fifth, everyone was happy. I’ve experienced [playing in] the postseason in the United States and Japan. I also got a ring when my Single A team in the minor league won. I really want to wear a ring in Korea, too.”