Host Korea finished third at the Asian Women’s Volleyball Championship on Sunday with a straight-set victory over China, with captain Kim Yeon-koung leading the offense as a one-person wrecking crew. 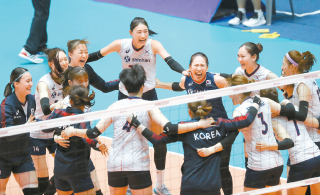 The Korean women’s volleyball team celebrates after beating China at the Asian Women’s Volleyball Championship at Jamsil Arena in Seoul on Sunday. [YONHAP]

Kim, the star wing spiker, scored a match-high 29 points, 27 of them with spikes on 47 attempts. Opposite spiker Kim Hee-jin chipped in 19 points, including a match-best three aces. Liu Yanhan had 15 points to lead China.

Korea is a first-time host of the Asian championship, which was inaugurated in 1975. The country has never won the event, with seven runner-up finishes.

The bid to get that elusive first title was foiled by a young Japanese squad that includes 10 teenagers in Saturday’s semifinals, as Korea fell in four sets.

Kim Yeon-koung single-handedly kept her team in the game in the back-and-forth first set, dragging Korea out of a 5-2 hole with three consecutive spikes. Her block gave Korea its first lead of the game at 7-6.

And with Korea trailing 8-7, Kim scored on three more spikes, with opposite spiker Kim Hee-jin contributing an ace during a 4-0 run.

China then erased a 13-9 deficit in a hurry, with five unanswered points. Then at 15-15, Kim Hee-jin’s spike and two straight blocks by Yang Hyo-jin put Korea up 18-15.

China responded with four straight points, and Kim Yeon-koung got to work again. After Korea pulled to a 19-19 tie, Kim was responsible for four of Korea’s next five points. Ha Hye-jin’s spike closed out the set for Korea at 25-21.

Kim continued to dominate early in the second set, staking Korea to a 3-1 lead. Korea never trailed the rest of the set. Whenever China got close, Kim rose to the occasion, either with a deadly spike or a timely block. In one dominant stretch, Kim scored six consecutive points for Korea for a 14-10 lead. Fittingly enough, it was Kim’s kill that gave Korea the second set at 25-20.

Korea got the first two points of the third set, but China kept things tight, with neither team leading by more than two points again until Korea led 23-20.

Kim Yeon-koung largely remained in the background early in the set, and Kim Hee-jin stepped up with an ace and a couple of kills.

Then with Korea trailing 19-17, Kim put on her cape and came to the team’s rescue, scoring on three straight spikes to put Korea ahead 20-19.

China tied it up again, before Kim Su-ji got the next two Korean points with blocks.

Wang Yizhu’s spike flew out of bounds to give Korea a 23-20 cushion.

Wang redeemed herself with a kill to cut it to 23-21, but Kim Yeon-koung delivered a spike to put Korea one point away from the victory.

China got a point back, but Lee Jae-yeong then finished off China with a spike that was blocked out of bounds.

The next major event for Korea is the Asian Olympic qualifying tournament in January. With two of the continent’s best, China and Japan, having already secured spots at the 2020 Tokyo Olympics, Korea and Thailand, budding rivals in the region, are expected to contend for the one spot at stake at the qualifiers.