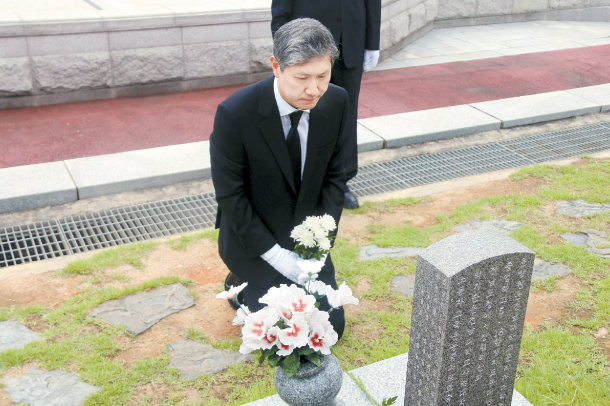 Roh Jae-heon, son of former President Roh Tae-woo, offers his condolences for the people who were killed during the Gwangju Democratization Movement at the May 18th National Cemetery in Gwangju on Aug. 23. It was the first time a family member of Korea’s past strongmen tried to make amends for the then-military junta’s crackdown on the struggle for democracy. [YONHAP]

The son of former President Roh Tae-woo offered his condolences at the May 18th National Cemetery in Gwangju last week marking the first time a family member of Korea’s past strongmen tried to make amends for the then-military junta’s most prominent crackdown on the struggle for democracy.

According to the maintenance office of the cemetery on Monday, Roh Jae-heon, ex-President Roh’s only son, visited the memorial on Aug. 23 and performed condolence rites for the 680 people buried there who were killed during the Gwangju Democratization Movement.

In a guest book at the memorial, Roh Jae-heon left a message saying he “sincerely apologizes to the victims and their families,” and pledging to “deeply embed the spirit of the Gwangju 5.18 Democratization Movement” in his heart.

Roh Jae-heon apparently told his entourage that day that his visit was on behalf of the wishes of his currently incapacitated father, who said on multiple earlier occasions he wanted to pay respects at the cemetery.

Thousands joined the public uprising in Gwangju from May 18 to 27, 1980, against Gen. Chun Doo Hwan’s seizure of power in a military coup five months earlier.

Maj. Gen. Roh Tae-woo was one of Chun’s closest friends and allies in orchestrating the overthrow of the government, and allegedly later played a key role, along with Chun, in ordering a brutal clampdown on protesters in Gwangju that left hundreds dead.

The massacre that took place is forever seared into public memory in Korea, and played an instrumental role in galvanizing the civic movements that eventually pushed the junta to concede to democratic presidential elections in 1987. In a twist of irony, a split in the pro-democracy vote between Kim Young-sam and Kim Dae-jung led to Roh Tae-woo, Chun’s handpicked successor, being elected as president that year through a slight plurality. He served a five-year term until 1992.

After he was succeeded by Kim Young-sam, Roh was arrested and put on trial alongside Chun for their roles in the 1979 coup and 1980 Gwangju massacre, which resulted in them being sentenced to death. However, they were pardoned just a few years later.

As a private citizen, Chun remained outspoken and unapologetic about his role in the massacre, denying allegations that he had ordered the soldiers sent to Gwangju to fire at civilian protesters. The unrepentant attitude he showed while attending a hearing on the massacre in March earned him heavy criticism from the public.

Although Roh kept a lower profile and apologized to victims on multiple occasions, he too faced his fair share of controversy due to a comment he made in 1995 seemingly trivializing the bloodshed and passages in his recently published memoirs that appeared to justify the coup and massacre.

Some civic organizations representing the Gwangju victims, however, saw Roh Jae-heon’s visit as a positive sign that at least some of those responsible for the massacre are showing regret for their actions.