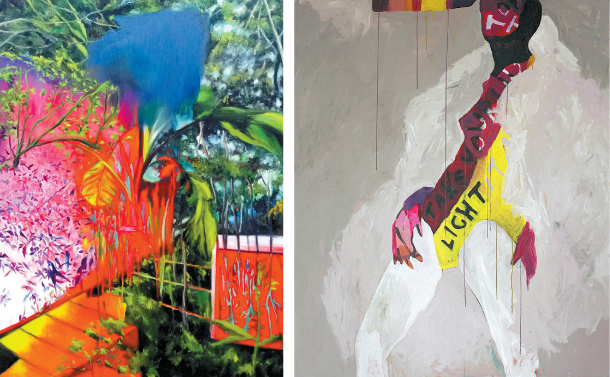 A total of 33 artworks by 11 artists will be on display at “The Hybridity and Dynamism of the Contemporary Art of the Philippines” exhibition, including, from left, Kitty Kaburo’s “Chemical Eden” (2018), Chati Coronel’s “Violet (Take Your Light to the Top and Light It All Up)” (2016). [HANSAE YES24 FOUNDATION]

It may be a short exhibition, but the upcoming art exhibition put on by the Hansae Yes24 Foundation is a must-visit for art lovers who would like to learn about the essence of contemporary art from the Philippines.

“The Hybridity and Dynamism of the Contemporary Art of the Philippines” will be held from Sept. 4 to Sept. 9 at the Insa Art Center in Insa-dong, central Seoul, featuring 33 paintings and installations by 11 artists that are making their mark in the Filipino art world. The exhibition is the foundation’s fifth, and it is a part of their ongoing international culture exchange project.

“Philippine art is unfamiliar to the Korean art world because it has never been properly introduced here,” said curator Choi Eun-ju. “The Philippines experienced western colonization much earlier than we did, and their people live in cities all around the world. They went through political turmoil, like the civil revolution, which is the reason why their modern and contemporary art is embedded with anti-colonialism and every other idea of the modern world.”

Diversity and dynamism, as suggested through the title of the exhibition, are the two core elements that make up Filipino art and also the core values that penetrate the exhibition’s works, according to curator Choi. “It’s a mixture of all ideas, but you can still see what it means to be ‘Filipino’ in the works,” she said.

Such dynamism is readily visible through the paintings of the 10 artists - Zean Cabangis, Lui Medina, Victor Balanon, Kitty Kaburo, Alvin Gregorio, England Hidalgo, John Frank Sabado, Patricia Perez Eustaquio, Chati Coronel and Norberto Roldan - especially in their use of bright colors and ideas in their works. For instance, Gregorio’s “Lionization” (2008), is made with warm and bright colors added with images of famous children’s cartoon characters to talk about multiculturalism and cultural monopolization, while Kaburo’s paintings express her confusion through the strong hues, like in the piece “Chemical Eden” (2018).

“Being Filipino comes from being mixed,” explained Choi. 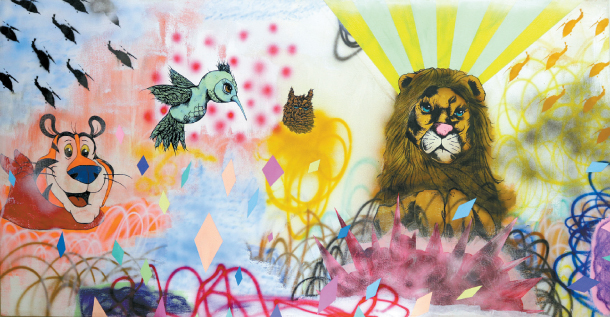 For the exhibition, artist Ged Merino traveled to Seoul and held a public workshop on Saturday, where participants got to wrap their books or shoes and talked about the memories embedded within the objects. The wrapped results will be on display at the exhibition as Merino’s works.

“It’s hard to understand the Philippines at a single glance,” said Cho Young-soo, the chairperson of the board at Hansae Yes24 Foundation.