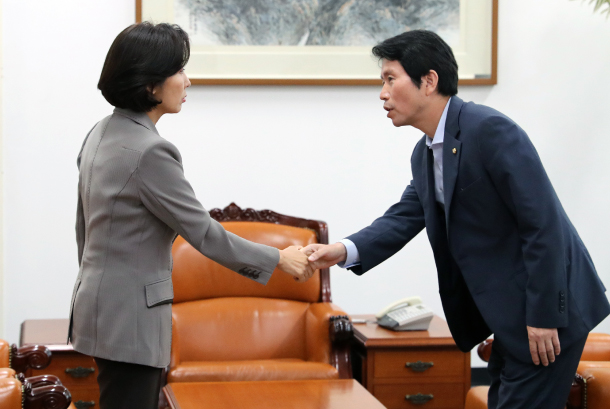 In a surprising turn of events following days of squabbling, the floor leaders of the two largest parties reached the agreement on Wednesday and decided to hold a plenary session of the parliamentary Legislation and Judiciary Committee, which will conduct the hearing, later that day to formally schedule the session.

Friday is the final deadline for the National Assembly to send Cho’s confirmation hearing report to the Blue House.

The adoption of confirmation hearing reports is a procedural measure for the National Assembly to express agreement to the president’s nominations for minister-level officials, though it remains to be seen whether the LKP will actually agree to adopt one for Cho.

Even if the report doesn’t come, President Moon Jae-in can still go ahead and make the appointment without the lawmakers’ blessing, though this move would undoubtedly enrage the LKP, which vehemently opposes tapping Cho to lead the Ministry of Justice.

In agreeing to hold Cho’s confirmation hearing, the LKP floor leader said Wednesday that her party would drop its initial request to summon Cho’s family members to the hearing as witnesses. The LKP had been clashing with the DP over calling Cho’s mother, wife and daughter to the session, which the DP resisted, calling the act “inhumane.”

Instead, the floor leaders of the DP and LKP agreed Wednesday not to summon any witness for Cho’s hearing, citing Article 8 of the Personnel Hearing Act, which states that the committee should forward a written request for such an appearance by no later than five days before the date on which they are requested to appear.

“We had many different opinions [between the DP], but we agreed that it was the right thing to carry out the National Assembly’s duty by holding nominee Cho’s hearing on Friday,” said Rep. Na Kyung-won, floor leader of the LKP.

Cho said he was “relieved” that a date for his confirmation hearing has been fixed.

The DP and LKP originally agreed to hold Cho’s confirmation hearing earlier this week on Monday and Tuesday, but the agreement was only verbally made last week and the parties failed to follow that with the adoption of a formal report scheduling the hearing due to skirmishes on the list of witnesses.

The LKP had wanted to summon Cho’s wife, daughter and mother to question about their wealth and alleged schemes over school admissions.

With the likelihood growing of no confirmation hearing ever being held, Cho held a press conference at the National Assembly where he took questions from reporters for 11 hours.

Cho spent a lot of the time denying allegations about his daughter’s academic career and family wealth and urged the local media not to “attack” his children with false reports.