Korea will close out the men’s basketball world championships with crucial classification contests against China and Cote d’Ivoire. 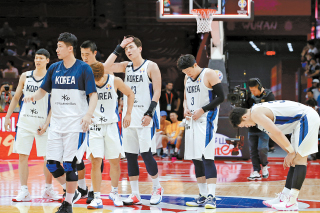 The Korean men’s basketball team reacts after losing to Nigeria during a Group B game at the World Cup in Wuhan Sports Centre in China on Wednesday. [REUTERS/YONHAP]

In what’s shaping up to be a dismal campaign at the FIBA Basketball World Cup in China, Korea lost three straight games to finish last in Group B. Only the top two teams from each of the eight groups in the tournament advance to the second round, while the bottom feeders are relegated to the classification stage.

In Group M of the classification round, Korea will be joined by Nigeria, which finished third in Group B after destroying Korea 108-66 on Wednesday. These two teams will be paired with the two worst teams from Group A, China and Cote d’Ivoire.’

Teams will only face opponents that they didn’t play in the group stage. Korea will go up against China on Friday and Cote d’Ivoire on Sunday. Both matches will take place in Guangzhou, China.

These aren’t meaningless, playing-out-the-string games, because a spot in next year’s Olympics will be at stake.

This year’s Basketball World Cup doubles as qualification for the 2020 Tokyo Olympics. The top Asian team from this tournament, other than the Olympic host, Japan, will punch a ticket to Japan.

Aside from Korea, representing Asia at the World Cup are China, Iran, Japan, Jordan and the Philippines. After Wednesday’s action, Korea, China, Iran and the Philippines were all relegated to the classification round. Japan and Jordan will play their final group games on Thursday but their fates have already been sealed, as they, too, will drop to the classification stage. And China remains the only Asian team with a victory so far.

Results from the group stage are carried over to the classification round. This means Korea will have to win both of its games and hope China loses its two games in order to have any hope of qualifying for Tokyo 2020.

If Korea doesn’t qualify for the Olympics this time, the last opportunity will be FIBA’s qualifying tournament next July.

But Korea will first have to make it to that event. That last tournament will be open to the 16 best teams from the World Cup who didn’t already qualify for the Olympics and two highest-ranked teams each from Africa, the Americas, Asia, Oceania and Europe.

Korea last competed at the Olympics in 1996.