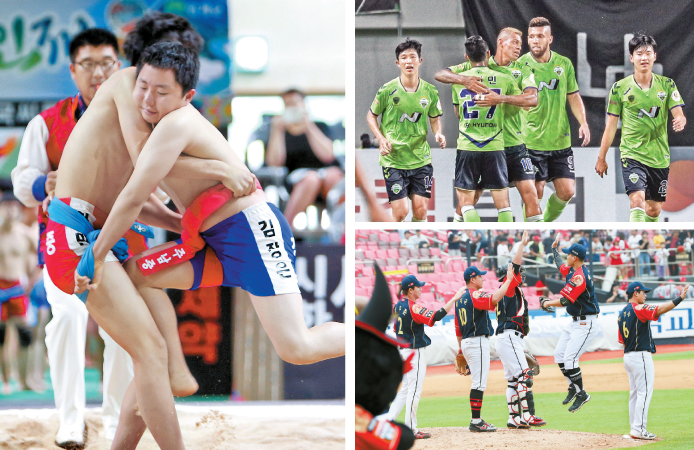 Clockwise from left: Students compete in a national ssireum tournament in July; Jeonbuk Hyundai Motor celebrates after scoring against FC Seoul on Sept. 1; the KT Wiz celebrate after defeating the SK Wyverns on Sept. 8. [YONHAP, NEWS1]

The Chuseok harvest festival may mean offices across the country close as people hit the road to head to their hometowns and spend time with family, but the sports world will keep on working right through the holiday season.

Here are the details on all the games to watch out for over Chuseok.

The KBO will be in action every day over the holidays, with each team playing two two-game series over the long weekend.

One of the biggest match-ups to look out for begins today, as the NC Dinos take on the KT Wiz at Suwon Baseball Stadium in Suwon, Gyeonggi.

With just 0.5 games separating the two teams as of 6 p.m. Wednesday, the Wiz could take this opportunity at home to overtake the Dinos in the KBO standing to claim 5th place, the coveted Wildcard spot that could earn either team a place in the playoffs. With just a few weeks left of the KBO’s regular season, this Thursday-Friday series could determine which team gets to keep playing into October.

Over the weekend, the No. 1 SK Wyverns will face the second-place Doosan Bears at Munhak Baseball Stadium in Incheon. The Wyverns sit a comfortable 4.5 games ahead of the Bears as of Wednesday, but there is still enough time left in the season for the Seoul club to upset the Wyverns’ race for the pennant.

The third-place Kiwoom Heroes face the fourth-place LG Twins today, before going into a slightly easier series against the Wiz over the weekend. With very little separating the Heroes and the Bears in the table, some big wins in these series could go a long way to ensuring the club has an easier path to the Korean Series.

Elsewhere in the KBO today, the Hanwha Eagles will face the Samsung Lions, the Bears will take on the Tigers and the Wyverns will face the Lotte Giants.

Ryu Hyun-jin of the Los Angeles Dodgers sat out of the rotation on Tuesday, but could make an appearance on the mound as a bullpen pitcher or return to the rotation over the weekend against the New York Mets as the Dodgers have now claimed the National League West title.

The Rangers will be in action again over the weekend against Oakland Athletic, while the Rays will play the Los Angeles Angels. Both Choo and Choi are likely to appear in those games as well.

Tottenham Hotspur will take on Crystal Palace in the English Premier League on Saturday, although whether Son Heung-min will appear or not is still unclear.

Son has got off to a slow start for Spurs this season, failing to find the back of the net in the two games he’s appeared in so far this year. Having joined the national team for the World Cup qualifier against Turkmenistan on Tuesday, its possible that Mauricio Pochettino may choose to rest Son over the weekend.

Newcastle United will face a tough match against Liverpool on Saturday. It’s unclear whether midfielder Ki Sung-yueng will be called up for that game. Ki remains in Newcastle’s first team, but has only appeared in one match so far this season, against Norwich City on Aug. 17, playing for 74 minutes.

Golf fans have little to look forward to this weekend, as the KLPGA and KPGA take a break for the week and the LPGA stops for the Solheim Cup. The PGA will be in action from today with the Greenbrier Classic at The Old White TPC in White Sulphur Springs, W. Va. in the U.S. A total of six Koreans will compete at the tournament, including An Byeong-hun, the highest ranked Korean on the tour at No. 48.

The K-League will be back in action over the weekend.

With just a month to go of this year’s season and only one point separating Jeonbuk Hyundai Motors and Ulsan Hyundai at the top of the table, it’s still all to play for in the K-League.

If you’re looking for something a little more traditional this holiday season, the 2019 Chuseok Ssireum Contest is running from Tuesday to Sunday at Yeongam indoor gymnasium in Yeongam, South Jeolla.

Ssireum, a form of traditional Korean wrestling, has strong ties to Chuseok and local tournaments are held across the country during the holiday season. These tournaments operate on a last-man-standing basis. Contestants enter the ring until one forces the other’s upper body to touch the ground. That person is then eliminated and another challenger enters the ring.

The Yeongam contest is being televised, so budding ssireum fans will be able to tune into KBS1 over Chuseok to check out the event.