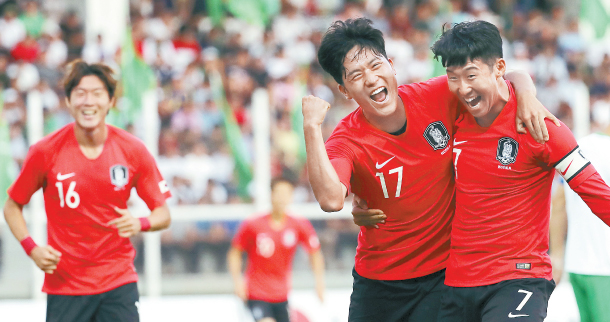 Na Sang-ho, second from right, celebrates after scoring the opening goal against Turkmenistan during the Group H match in the second round of the Asian qualifiers for the 2022 FIFA World Cup at Kopetdag Stadium in Ashgabat, Turkmenistan on Tuesday. [YONHAP]

The 37th-ranked Korea defeated 132nd-ranked Turkmenistan 2-0 during the second qualifying round for the 2022 FIFA World Cup in Qatar at Kopetdag Stadium in Ashgabat, Turkmenistan on Tuesday.

Beginning the match with a 4-1-4-1 formation, Korea got off to a great start as Na Sang-ho scored the opening goal in the 12th minute. This was only Na’s eighth national team match and his first goal for the senior team.

Despite expectations that Korea would dominate Turkmenistan, the Taeguk Warriors stayed silent for most of the rest of the match. Korea managed to cling onto its lead into the second half, before finally doubling it in the 81st minute with a free kick from Jung Woo-young.

“I’m happy to have scored in a World Cup qualifying match, but I am also disappointed that we didn’t score more goals,” Na was quoted as saying on Yonhap. “We all tried to sneak behind the defense and exploit space behind their wall and I think we executed that well. But we may have taken our foot off the pedal a bit after getting that first goal.”

Na started his professional career with Gwangju FC in the K League 2 in 2017. Over two seasons with Gwangju, Na scored 18 goals in 49 matches, before heading to Japan this year to join FC Tokyo in the J1 League.

On the senior national team, Na only started to get called up starting last year. Although this was Na’s first goal for the senior team, he was part of Korea’s U-23 team that won the gold medal at the 2018 Asian Games in Jakarta-Palembang.

While Na got to celebrate his debut goal, the Korean team captain Son Heung-min once again struggled to find the back of the net.

Son last scored for the national team during a friendly match against Colombia on March 26. Looking at tournament matches, Son hasn’t scored a goal since the 2018 FIFA World Cup, during a group match against Germany on June 27.

“We played a good match in the first half,” Bento was quoted as saying. “We had the possession of the ball and created several scoring changes. But in the second half, we made a lot of small mistakes and allowed counterattack opportunities. We didn’t play the way we wanted to play.”

This is similar to Bento’s reaction after Korea’s friendly match against 94th-ranked Georgia last week. Before facing Turkmenistan, Korea played to a 2-2 draw against Georgia on Sept. 5. Korea originally scheduled the friendly match hoping that it would be a confidence booster, but instead ended up with bigger concerns.

At the time, Bento criticized Korea’s performance by saying, “As far as the first half, it was the worst we’ve played in my 17 matches with the team.”

Once again, Bento pointed out that Korea will have to figure out ways to create chances in order to score.

“I think we have to look at the whole picture,” Bento was quoted as saying. “We have to play an efficient brand of football that will allow us to convert more of our chances. We didn’t have problems generating chances, and we have to concentrate harder on making sure those chances lead to more goals.”

After competing all home and away matches, which won’t be completed until June next year, the winner from each of the eight groups is guaranteed to advance to the next round. Along with the eight teams, the four-best runner-up teams will also qualify into the third qualifying round.

Looking at the current standing, North Korea leads Group H as they’ve won both of their matches to earn six points. South Korea is second in the group as it has only played one group match so far. Korea has three points with a win and no losses.