Samsung Electronics Vice Chairman Lee Jae-yong visited Samsung C&T’s subway construction site in Riyadh, Saudi Arabia on Sunday. It is the first time Lee has visited the overseas construction site of a Samsung affiliate, according to the Korean electronics giant. 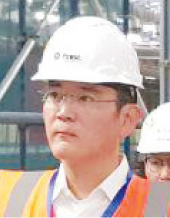 Considering Samsung usually doesn’t disclose Lee’s moves, its recent flood of press releases on Lee’s whereabouts suggests the company is trying to show that he has no problem carrying out his managing role even after the Supreme Court ordered a retrial of a bribery case involving Lee last month.

“We are very grateful and proud of all of you working here rather than spending time with family members in the holiday season,” Lee said in Riyadh. “The Middle East is becoming a land of opportunity in the 21st century as the region pursues projects to reduce dependence on petroleum energy.”