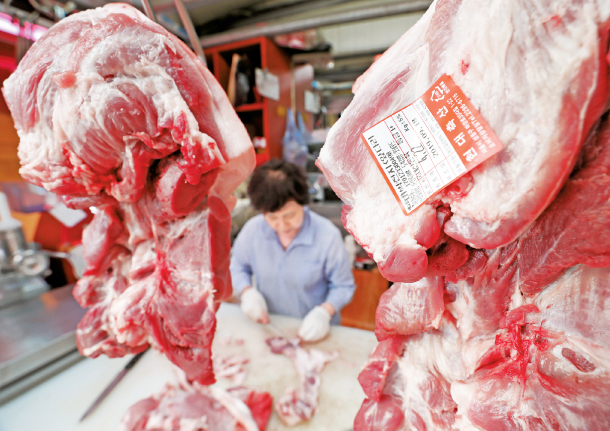 African swine fever has been confirmed at a second site, this time at a pig farm in Yeoncheon County, Gyeonggi.

The announcement comes just a day after another outbreak of the deadly disease was confirmed, raising the possibility that the contagious virus could spread to other pig farm across the country.

The Ministry of Agriculture, Food and Rural Affairs on Wednesday said that the virus was present at a pig farm in Yeoncheon County. The county borders North Korea and neighbors Paju, where the first outbreak was reported.

Authorities said that they are currently investigating if there are any connections between the farm in Paju and the farm in Yeoncheon County. They are only 50 kilometers (31 miles) apart.

According to the government, the second farm Tuesday reported a sick pig around 2 p.m. The ministry said it culled all 4,732 pigs from that farm.

The second outbreak heightened concerns of the disease spreading despite containment efforts.

The ministry said it has started fumigating all six areas - not only Paju and Yeoncheon but also the neighboring areas of Pocheon, Dongducheon, Gimpo and Cheolwon - after designating them as special management regions.

Additionally, the government extended the period in which the pigs aren’t supposed to be transported outside of the farms in the six designated areas from the previous one week to three weeks.

It is also restricting visitors to pig farms in Gyeonggi and Gangwon other than those combating the virus, including vets, consultants and feed companies.

The government had ordered a 48-hour lockdown on all pig farms and related vehicles after confirming the first outbreak. Authorities also culled 3,950 pigs from three separate farms owned by the same farmer in Paju and fumigated all 6,309 pig farms across the country.

The disease, however, has an incubation period of five to 15 days, suggesting that it could have spread prior to the first outbreak.

The pig farms are 10 kilometers or less from North Korea, raising the possibility that virus-carrying pigs or wild boar north of the border are responsible for the latest outbreaks. North Korea confirmed an outbreak of the virus in May. The second farm is only four kilometers away from the wire separating the two Koreas.

The government downplayed the scenario.

“We believe that such a possibility is unlikely,” said Minister of Unification Kim Yeon-chul, during a meeting with lawmakers. “For additional containment measures, it is important to learn the accurate route of infection, so related authorities are closely investigating.”

The Unification Ministry said that it has sent a letter to North Korea, requesting cooperation in containment. South Korea has sent multiple requests to the North since June, however, it has yet to receive a response.

The Agriculture Ministry in a statement said the wholesale price rising 32.4 percent on Tuesday is a temporary phenomenon resulting from preemptive purchases on concerns about shortages in the short term.

The ministry said the government will continue to closely monitor the price and supply of pork and closely work with the agriculture cooperatives and producers to ensure a stable supply.

“Any livestock infected, including [those] with the African swine fever, are culled, and therefore, they are not sold or distributed,” said a ministry official. “Consumers can consume pork without having to worry about it.”

Although the swine fever is deadly with a mortality rate between 80 to 100 percent, it is not believed to harm humans.