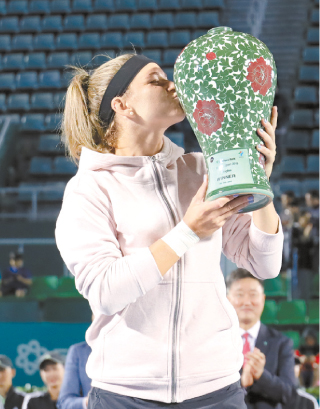 Karolina Muchova of the Czech Republic kisses her trophy after winning the Korea Open on Sunday. [AP/YONHAP]

Muchova, the No. 3 seed from the Czech Republic, defeated fourth-seeded Magda Linette 6-1, 6-1 in the rain-delayed final at Olympic Park Tennis Center in Seoul.

The match was initially scheduled to start at 1:30 p.m. but was pushed back by six and a half hours because of downpours, brought on by Typhoon Tapah.

The match lasted just over an hour, as Muchova, world No. 45, overwhelmed the 48th-ranked Polish player in all aspects.

This was the 16th edition of the Korea Open and Muchova is the 16th different champion and third from the Czech Republic.

Muchova broke Linette to open the first set, and easily won her services game to go up 2-0 after just four minutes.

In the third game, Muchova battled from 40-15 down to force the game to deuce, before breaking Linette for the second straight time and moving ahead 3-0.

Muchova continued to dominate Linette with sharply-angled ground strokes from the baseline, as she held her serve again to build a 4-0 lead.

Linette finally won her service game to cut it to 4-1, though she didn’t make it easy on herself with a series of unforced errors.

Muchova took a 5-1 lead with relative ease, and Linette self-destructed with three double faults in the seventh game, allowing Muchova to break her for the third time and win the first set 6-1.

Muchova remained in full control in the second set, winning her first service game without losing a point and breaking Linette to go up 2-0.

Muchova blanked Linette again to win the third game, punctuating it with her third ace of the set.

Linette rallied from 30-0 down and survived three deuces to hold her serve and make it 3-1.

Serving for the championship, Muchova quickly went up 40-0 and closed out Linette with a resounding backhand winner.

This was the second meeting between the two players. Linette had prevailed in three sets in the quarterfinals of the Bronx Open in New York last month, but she had no answer against Muchova this time.