An ‘Emperor’ returns home to perform: Pianist Kim Sun-wook is set to take the stage with conductor Chung Myung-whun

An ‘Emperor’ returns home to perform: Pianist Kim Sun-wook is set to take the stage with conductor Chung Myung-whun 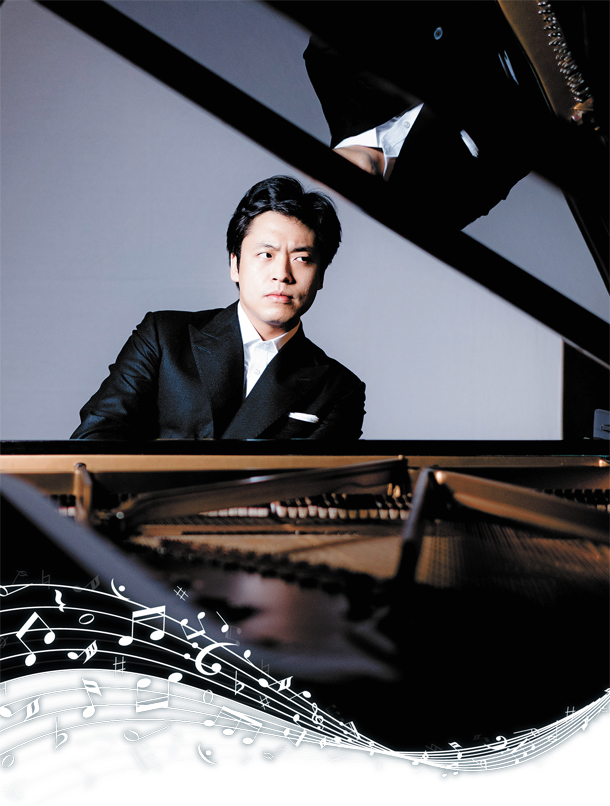 
Pianist Kim Sun-wook will reunite with Korean conductor Chung Myung-whun when he performs Beethoven’s piano concerto No. 5, widely known as “Emperor,” together with the centuries-old German orchestra Staatskapelle Dresden today.

It is not the first time for the two to perform “Emperor” together. They last collaborated to play Beethoven’s piano concerto No. 5 in 2013 with the Seoul Philharmonic Orchestra. The live performance was later released as an album by classical music label Deutsche Grammophon.

This time, the encounter between the two artists came together when Chung added some classical German works such as Brahms’ symphony No. 2 and Beethoven’s piano concerto No. 5 to the repertoire of the Staatskapelle Dresden, where Chung works as the principal guest conductor.

Chung became the first artist given the title in the 471-year-long history of the Staatskapelle Dresden in 2012 and has been leading the orchestra since.

Having won the prestigious Leeds International Piano Competition at the age of 18, the youngest winner in the history of the competition, Kim’s performance of “Emperor” this time will be a too-good-to-miss chance for classical music fans curious to see how far Kim has come since winning the award.

With Kim in Berlin at the time of the interview, JoongAng Sunday, the affiliate of the Korea JoongAng Daily, spoke to him through email prior to the classical performance set in Seoul.

“Staatskapelle Dresden is an orchestra with a thick and rich sound along with its own personality. In addition, it has an expert understanding of German composers, which I can learn a lot from,” wrote Kim.

He went on, “You can discover something new from novels or films that you already read or watched depending on your situation or feeling. No matter how many times you play the same piece, you can still find something new in the same music if you have more experience. I’m looking forward to discovering new wonders [from ‘Emperor’] this time.”

Six years have passed since Kim last performed “Emperor” with Chung, and he has experienced many changes in his life over the past few years.

Of all the changes, Kim said he has worked to make himself more relaxed.

“I always try hard to break my own frame and widen it, but I couldn’t really achieve a relaxed mind. There seems to be no shortcuts to reach that mindset. I compare myself in the past to myself now and realize that I have more room in my mind compared to the past. I’m desperately hoping that I am more relaxed now so that I can express more colors and feelings through my music this time.”

Kim has collaborated with Chung more than 20 times since 2007, but whenever they work together, the 31-year-old pianist says it feels new.

“Chung taught me many things like what music means in the lives of performers and how it affects our lives and how we should exert that influence. I always get this surreal feeling whenever I perform with him because my head and heart are feeling the exact same thing. I have high expectations for this performance.”

Beethoven’s “Emperor” is undeniably a masterpiece but the second movement is especially a favorite of many classical music fans. It starts smoothly, but later the piano weaves melodies throughout the piece. What picture does a pianist have in his mind when he plays that part?

“It differs depending on a situation. I have a different picture depending on how I feel. Sometimes I feel cozy and it [playing music] feels way too precious, so I can’t even approach it, and other times I feel like I’m holding my sorrow down. I feel nostalgic or I feel warm and silent.”

In the 1994 film “Immortal Beloved,” which chronicles the life of Beethoven, the second movement of the No. 5 plays during every scene that Beethoven’s love letters to his lover are shown on screen, and many viewers remember it as a love song. But Kim didn’t want to interpret Beethoven’s music in such a simple way.

“Beethoven was yearning for love all the time but we can’t define his music as only having one feeling. He gave his body and soul to every piece he ever worked on. Even if I were his friend, it would take a long time for me to understand him. I’m well aware of his entire life and the letters he wrote, but music is another language. I consider it my job to convey various feelings while I’m playing the music, so I try not to set a certain frame, but instead feel it.”

Beethoven’s piano concerto No. 5 is special for Kim in many ways.

In 2017, the pianist appeared in the domestic film “The Emperor.”

The film’s director Min Byeong-hun told the press that he was healed by Beethoven’s piano concerto No. 5, and from that, he was inspired to make the crime drama film.

“Beethoven’s music is pretty simple yet complicated,” said Kim. “The four different movements are clearly shown, but if you look into it you can see how he fiercely pondered over them. That flawless aspect of his music touches our emotions deeply. That special feature of Beethoven’s music must have healed the director.”

Apart from pursuing his career as a pianist, Kim is also scheduled to make his debut as a conductor early next year.

He will conduct several pieces including Beethoven’s symphony No. 4, Egmont Op. 84 and “Emperor” with Bournemouth Symphony Orchestra based in England.

But Kim drew a line and said, “I don’t have an ambition for becoming a conductor.” He said he is just trying out his possibilities.

“After graduation, I came to a conclusion that it’s hard for me to juggle conducting and piano, so I have been focusing on piano. I’ve been working with the Bournemouth Symphony Orchestra over the past decade and the orchestra has been telling me ‘You should try conducting if you feel like it.’ Thanks to their support, I am going to try. This is going to be my first appearance as a conductor, so I chose pieces based on the things I’ve done back in school. In case of the piano concerto No. 5, I have this desire to conduct and play it at the same time. I’ll try my luck as a conductor this time and if I’m not good at it, I won’t do it.”

Renowned pianist Paik Kun-woo once said that “the most important task for young pianists is finding out their own world.”

Kim has his own world and is confident in it. “Everyone has different tastes and each performer has different preferences for his own world of music and that is private. This is why I can’t stop asking myself questions about what I want and why I want it.

“I don’t know whether it is fortunate or not but I’ve been making decisions by myself ever since graduating from a college in 2008. Over the course of doing it, I came to know what direction I want to go in my life and I also came to have my own style far earlier [than others.] I have been studying music with these firm values, too. Music is not like sports and there are no absolute superb musicians in the world but I can tell what is good music and performance. If you patiently keep trying hard to become a better musician, people will eventually come to you to listen to your music. You don’t have to prove that you are genuine. If you are genuine, they will appreciate you someday.”

Kim recently moved to Berlin after 10 years of living in London. The pianist said that the relocation has brought about many changes in his life, including making him go back to square one when it comes to music.

When asked about specific anecdotes about the changes he has seen in himself, however, Kim refrained and just said, “I’m breaking the egg and slipping out of my skin like some animals and insects do.”

He added, “Berlin is not as fancy as London but the city is more free-spirited and artists are respected here. I also love the fact that people here are not pretentious.

“In Korea, there are a lot people who have been watching my performances from when I was young, I find myself getting excited whenever I have performances in Korea. I don’t want to let those people down and I always want to show them that I’m making progress.”

The collaboration between Kim and Chung will be staged today at the Sejong Center for the Performing Arts in Gwanghwamun, central Seoul.