Lee Jae-ik could get first cap against Sri Lanka

Lee Jae-ik could get first cap against Sri Lanka

A key member of the Korean runner-up squad at this year’s FIFA U-20 World Cup has earned his first senior national team call-up for upcoming World Cup qualifiers. 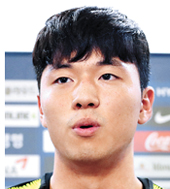 Head coach Paulo Bento announced his 25-man roster for a pair of second-round Group H matches in the Asian qualification competition for the 2022 FIFA World Cup.

South Korea, world No. 37, will host the 202nd-ranked Sri Lanka on Oct. 10 in Hwaseong, Gyeonggi, and then travel to Pyongyang on Oct. 15 to take on the 113th-ranked North Korea.

One name that sticks out is the 20-year-old defensive back Lee Jae-ik, who manned the back line during Korea’s surprise run to the final at the U-20 World Cup in Poland. Lee appeared in all seven matches for the young Taeguk Warriors - three group matches and four knockout contests.

Lee, who plays his club football for Al-Rayyan in Qatar, is one of nine defenders in this edition of the senior national team. Seven of them have made it back after playing in the previous World Cup qualifiers against Turkmenistan earlier in the month, with Busan IPark’s Kim Moon-hwan replacing Ulsan Hyundai’s Kim Tae-hwan this time.

Bento said he’d been keeping a close tab on Lee’s development, including his heroics with the U-20 national team and his days with Gangwon FC in Korea’s K League 1 before his move to Qatar.

“I felt that this was the right time for him to join the senior team and show us what he has,” Bento said. “We have a lot of depth in his position (at center back). He’ll not be guaranteed playing time, but we’ll see how competitive he can be against national team veterans.”

Valencia CF’s teen midfielder Lee Kang-in earned his second consecutive squad call-up. The 18-year-old made his senior international debut in a friendly against Georgia on Sept. 5 but was benched for Turkmenistan.

He’s joined in the midfield by captain Son Heung-min and in-form Salzburg attacker Hwang Hee-chan, among other usual suspects.

Lee’s stock is on the rise after making a UEFA Champions League debut and scoring his first La Liga goal earlier this month. Bento spoke highly of Lee’s offensive skills but said he still needs some work on the defensive end.

“He has tremendous upside, and he can put his skills to great effect on the offensive end,” the coach said. “He clearly has some holes in his defensive game, but we’ll try to help him make improvements in those areas when he trains with the national team.”

Nam, a former national team mainstay who’s had some poor luck with injuries, is back in the mix for the first time since last November. Bento would have selected Nam for the Asian Football Confederation (AFC) Asian Cup in January this year if not for a torn knee ligament. Then in August this year, Nam suffered a left leg injury that ruled him out for two September international matches.

Bento said it was “unfortunate” Nam had missed so much time because of injuries and that he was counting on the versatile player to make an impact on offense.

There are eight groups of five in the second round, and the top two nations from each group, plus the four best runners-up, will move on to the next phase.