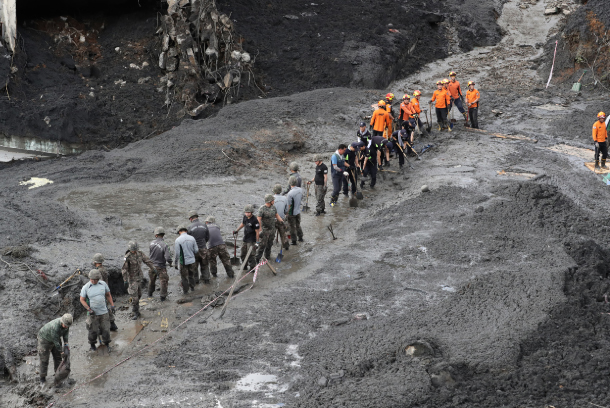 Police, soldiers and firefighters search for missing people in a landslide in Saha District, Busan, that subsumed a house and a restaurant on Thursday in the wake of Typhoon Mitag. [YONHAP]

As Mitag moved northeast, passing Gwangju, Daegu, the North Gyeongsang county of Uljin and Gangwon city of Samcheok, it brought heavy rainfall that led to flash floods and landslides. It exited into the East Sea by 6 a.m. Thursday.

“Damage was focused on Gangwon and North Gyeongsang,” an official of the Central Disaster and Safety Countermeasures Headquarters, an agency operated by the Ministry of the Interior and Safety, told the JoongAng Ilbo.

A man in his 70s was found dead after he was swept away in a flood in Seongju County, North Gyeongsang, around 8:48 p.m. Wednesday, according to the disaster headquarters.

A 47-year-old woman was also found dead after she was swept away in a flood in Pohang around 12:21 a.m.

A woman in her 50s died in Yeongdeok County when her house collapsed around 1 a.m. Thursday.

A 77-year-old woman surnamed Kim was also found dead after her house in Samcheok collapsed around 1 a.m. Thursday.

A house where an elderly couple lived collapsed in Pohang around 1:16 a.m. Thursday. Authorities were able to rescue the woman, but her 72-year-old husband was found dead around 10:30 a.m.

Around 9:05 a.m. Thursday, a landslide in Saha District, Busan, subsumed a house and restaurant. Four people were buried inside. Around 4 p.m. Thursday, the authorities recovered the body of a 65-year-old woman surnamed Bae, the owner of the restaurant.

Around 3 p.m. Thursday, authorities found the body of a man in his 40s near a stream in Gangneung, Gangwon. He is suspected to have been swept away by a flood.

At least one person went missing in a flash flood. A 64-year-old man was driving near Cheongha-myeon in Pohang around 9:49 p.m. Wednesday when his car was swept away by water. He was still missing as of press time Thursday.

Between 9 p.m. and 10 p.m. Wednesday, video footage uploaded by users on Twitter showed cars submerged on roads in Masan District of Changwon, South Gyeongsang, and in Ulsan. Footage taken in a coastal area of Sacheon, South Gyeongsang, showed people standing on flooded roads.

The heavy rainfall destroyed houses in the southern regions, leading to at least three injuries in Jeju and one in North Gyeongsang.

Around 30 people had to flee their homes in Jeju due to flooding Wednesday night. Some 1,056 houses lost power temporarily in Seogwipo in Jeju Island overnight, according to disaster headquarters.

At least 101 homes in Jeju and Wando County, South Jeolla, were flooded. Two schools and a major marketplace in Wando were also flooded.

Around 1,500 people were evacuated to local community centers in the Gyeongsang region and Samcheok over Wednesday night.

At least 34 people were rescued from their homes after they were trapped in the flooding in Gangneung and Samcheok.

A train moving from Bonghwa Station to Bongseong Station in North Gyeongsang was derailed when a landslide hit the train around 3 a.m. Thursday. There were 19 passengers and five crew members on the train. All were rescued, and no one was injured.

Some 680 flights were canceled in the south. Flights were resumed by 6 a.m. Thursday.