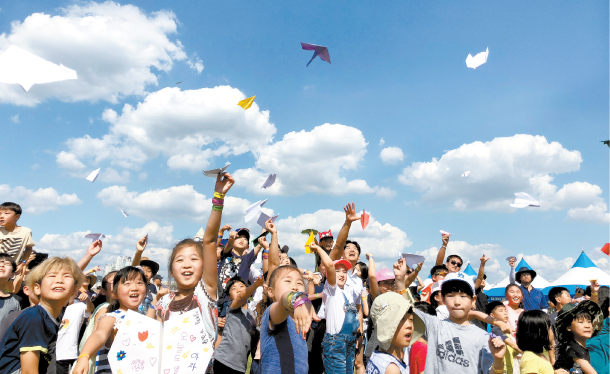 Participants of all ages ranging from kindergartners to parents fly the paper planes they made at the annual paper plane festival organized by the Seoul city government in Yeouido, western Seoul, in September last year. [SEOUL METROPOLITAN GOVERNMENT]

The city government of Seoul is hosting a paper plane festival at Yeouido Hangang Park in western Seoul this coming Sunday.

The paper plane festival, which is being hosted for the 11th time this year, will be held from 10 a.m. to 6 p.m. at the park.

“We prepared the festival for families to take part in together over the weekend,” the Seoul Metropolitan Government said in a statement. “The festival is being held at the Yeouido Hangang Park because the area was formerly an airfield and it would provide a good occasion for families to have fun together while competing at how far they can fly their own paper planes.”

Participants can register for paper plane-flying competitions at the festival, which will be organized into three categories: how far the plane can fly, how long it can fly for and how accurately it can fly. Participants will be divided by their age in the competitions for distance flown and length of time.

Only 50 family groups can register for the accuracy race. Family members will be asked to fly their paper planes so they land in a designated area.

The winners of each of the competitions will be awarded at the end of the festival.

There will also be a special exhibition on the history of airplanes and their development, aviation science and small booths prepared for children’s activities.

“Participants can try their hand in making miniature models of helicopters, parachutes or rockets and also take part in racing drones or learn how to use a 3-D printer,” the city government said in its statement.

A kite-flying competition will also be organized at the festival this year. Participants will be able to make their own kites and fly them, as well as learn how to make kites using traditional Korean designs.

“Registration for kite-flying events can be made in person during the festival,” the city government said in its statement. “There will also be an award ceremony following the event.”

“There is something to paper plane-flying. It ties back to our memories as I think most of us grew up flying paper planes at some point,” said Ki Bong-ho, an official of the Seoul Han River project department of the city government. “It will be a festival for families and friends to take part in together on an autumn afternoon.”

Registration will be open until Friday at naver.me/IDSk8hJU with a total of 800 spaces available.