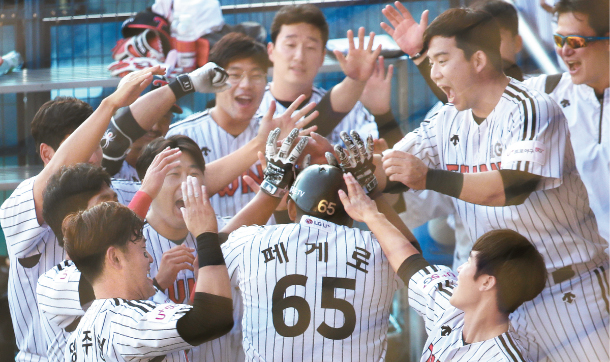 The LG Twins celebrate after Carlos Peguero, center, hit a solo home run during Game 3 of the first playoff round against the Kiwoom Heroes at Jamsil Baseball Stadium in southern Seoul on Wednesday. [YONHAP]

The LG Twins managed to keep their hopes alive by winning Game 3 of the KBO’s first playoff round against the Kiwoom Heroes at Jamsil Baseball Stadium in southern Seoul on Wednesday.

With the win, the Twins managed to stay in the fight with the series score now at 2-1 to the Kiwoom Heroes.

Unlike in the other two games, it was the Heroes who took the lead to start Game 3. After Lee Jung-hoo’s single, Jerry Sands struck out. A wild pitch by the Twins’ starter Patrick Kelly allowed Lee to get to second base. Then, Park Byung-ho got a base hit to allow Lee to cross home plate, taking a 1-0 lead. With another run at the top of the second, the Heroes extended their lead to 2-0.

But the Twins started to catch up at the bottom of the second inning. After Kim Hyun-soo flew out, Chae Eun-seong was given a walk. Park Yong-taik struck out, but the Heroes’ starter Lee Seung-ho once again walked the Twins’ next batter, Yoo Kang-nam. With two outs, Jung Ju-hyeon finally broke the silence as his single was good enough to bring home Chae, scoring the Twins’ first run of the day.

After a scoreless third, the Twins finally tied the score with a solo home run from Chae.

While the score was tied at 2-2, the Twins took the lead for the first time at the bottom of the seventh once again, with Jung leading the charge. Jung hit a double but thanks to an error by Sands, he advanced all the way to third base. Then, Oh Ji-hwan hit a sacrifice fly to bring Jung home.

A solo home run by Carlos Peguero in the eighth allowed the Twins to extend their lead to 4-2.

Things could have gone horribly wrong for the Twins at the top of the ninth. The Heroes had a chance to get back into the game and potentially end the entire series when they got runners on second and third base with one out. However, as pinch hitter Park Dong-won hit a line drive and infielder Kim Hye-seong hit a fly, the Twins won the Game 4-2.

By giving up two runs, five hits and a walk while striking out five in six innings, Kelly picked up his first win in the KBO playoffs. In addition to Kelly’s win, this win was also a shot at redemption for Twins’ closer Go Woo-suk.

Despite being the Twins’ dominant closer during the regular season, Go didn’t see much success in the playoffs as he allowed the Heroes to pick up come-from-behind victories in the first two games of the series.

During Game 1, Go allowed Park Byung-ho to get a game-ending home run at the bottom of the ninth, in his first pitch on the mound, for the Heroes to take home a thrilling 1-0 victory. Then, during Game 2 on Monday, Go once again gave up three hits and a run throughout two-thirds of an inning to tie the game in the ninth.

Due to this, the Heroes once again picked up a 5-4 come-from-behind victory at the bottom of the 10th.

With a win, the Twins now have one more chance to stay in the contest, but it won’t be easy. Despite a loss, the Heroes are still ahead in the series with two wins and a loss. As the playoff rounds are played in a best-of-five format, the Twins will have to pick up a win in the next game just to stay alive, while a win for the Heroes will knock out the Twins completely.