2019 was a great year for Koreans in the MLB

2019 was a great year for Koreans in the MLB 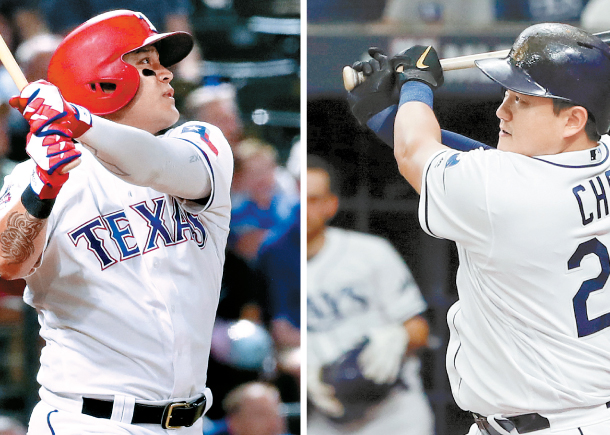 This year was a big one for Korean baseball players in the majors - at least for those who survived in the big leagues until the end of the season. Ryu Hyun-jin of the Los Angeles Dodgers, Choi Ji-man of the Tampa Bay Rays and Choo Shin-soo of the Texas Rangers all had quite possibly the best seasons of their respective careers.

Just a day after Ryu’s season ended last week, Choi ended his as the Rays lost Game 5 of the American League Division Series to the Houston Astros. Although the Rays didn’t advance to the Championship Series or the World Series, Choi still had the best season of his career.

When Choi headed to the United States right after graduating from high school, it took him longer than expected to earn a full-time spot in the majors. Choi first signed with the Seattle Mariners in 2010 but never played for the MLB team. After briefly staying with the Baltimore Orioles, again in the minor league, Choi joined the Los Angeles Angels in 2015.

Choi finally made his major league debut with the Angels, but that didn’t guarantee him a starting spot. After only one season with the Angels, Choi was released and signed a minor league contract with the New York Yankees for the 2017 season. Once again, he only spent a year with the Yankees and signed a minor league deal with the Milwaukee Brewers. Although he left quite an impression with the Brewers, Choi was traded to the Rays this season.

Moving to the Rays turned out to be the right thing for Choi. After being called up in July last year, Choi played 49 games and recorded a 0.269 batting average with eight home runs and 27 RBIs.

This season, Choi played his first full season in the big leagues, appearing in 127 games with a 0.261 batting average, 19 home runs and 63 RBIs. With Choi on board, the Rays clinched the wild card spot.

The Rays’ advancement to the playoffs also gave Choi his postseason debut. Choi’s bat stayed silent in the wildcard game, but he finally made his first hit, a home run, in Game 3 of the Division Series.

Throughout six postseason games, Choi was given seven walks and added three hits.

Along with Choi, Choo also had the best season of his career. At age 37, Choo was the oldest Korean playing in the major league this season, but his age didn’t stop him from turning in an impressive year.

For Choo, 2018 was a tough act to follow. The veteran stole headlines with an astounding 52 game on-base streak, breaking Ichiro Suzuki’s 43-game to set a new record for an Asian-born player and going on to set a new all-time record for the Rangers.

Choo’s streak ended on July 21, 2018, but to this day remains the longest on-base streak of any active player in the MLB. However, things didn’t go to plan in the second half of the season, and Choo returned this year with something to prove.

This year, it was all about the home runs.

First, Choo made headlines in June by hitting his 200th home run after 15 years in the majors. By doing so, Choo became the first Asian player in the major league to ever hit more than 200 career home runs.

Choo hit 24 home runs this season, a new career high. Before this season, Choo’s career high in home runs was 22, during the 2010, 2015 and 2017 seasons. This was the seventh time in his major league career that Choo has hit over 20 home runs in a single season.

But it wasn’t all good news for Korean players in the majors. Oh Seung-hwan, formerly of the Colorado Rockies and now of the Samsung Lions, and Kang Jung-ho, formerly of the Pittsburgh Pirates, were both released by their MLB teams this season.