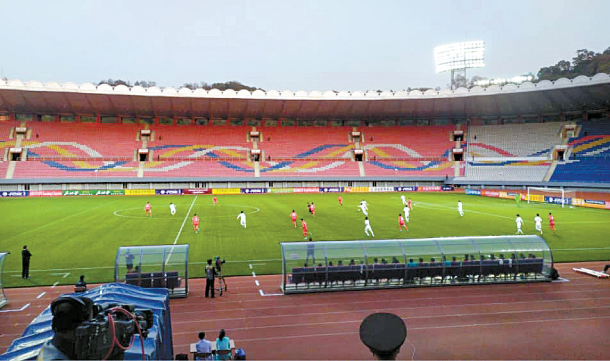 South and North Korea compete against each other in the second round of the Asian qualifier for the 2022 FIFA World Cup in an empty Kim Il-sung Stadium in Pyongyang on Tuesday. [KFA]


South Korea and North Korea faced off at Kim Il-sung Stadium in Pyongyang on Tuesday, ending the 2022 World Cup qualifier with a scoreless draw.

As all foreign media were restricted from traveling to Pyongyang to report on the game, including South Korean broadcasters, precious little information was available as of press time.

Asian Football Confederation (AFC) officials attending the game were able to relay match updates to the AFC headquarters in Kuala Lumpur, Malaysia, which then passed the information on to the Korea Football Association (KFA). North Korea will later provide a DVD of the match to South Korea for broadcast, according to Seoul’s Unification Ministry, but as of press time, the only information available were the AFC updates.

Despite concerns that the South Korean football players would have to play in a crowded stadium filled with North Korean fans, the situation turned out to be quite the opposite. According to photos made available shortly after the match began, Kim Il-sung Stadium was completely empty at kickoff.

Wearing all white, the South Korean football team was once again led by captain Son Heung-min of Tottenham Hotspur.

From the scant information available, it seems that the first half was fairly quiet. At halftime the score was 0:0, and the only update shared by the AFC during the whole first half was a yellow card for North Korea’s Ri Yong-jik in the 30th minute. Japanese-born Ri plays as a defensive midfielder for Tokyo Verdy.

The second half saw a lot of bookings and a lot of substitutions, but very little action.

Again, no further information on any of the infractions was available.

South Korea made another change in the 65th minute, taking off midfielder Hwang In-beon of Vancouver Whitecaps FC and bringing on Kwon Chang-hoon of SC Freiburg. Fifteen minutes later, South Korea took off forward Hwang Ui-Jo of Bordeaux and brought on Kim Shin-wook of Shanghai Shenhua.

North Korea made its first change in the 81st minute, bringing on Kim Kum-chol of Rimyongsu Sports Group and taking off Sim Hyon-jin. It is not known which team Sim, who once played for Wigan Athletic FC in the English Championship, currently plays for.

Despite the changes, the game ultimately ended as a draw, with neither team breaking the silence.

This was a disappointing result for South Korea, who, at No. 37 in the world ranking, would have expected to easily defeat the 113th-ranked North Korea.

With the draw, South Korea’s record in the second round of qualifiers for the 2022 FIFA World Cup stands at two wins and a draw, totaling 7 points. South Korea’s all-time head-to-head record with North Korea now stands at seven wins, nine draws and a loss.

The South Korean team will leave Pyongyang at 5:20 p.m. today. They’ll stop in Beijing on the way back to Incheon. The team is expected to arrive in Incheon at 12:45 a.m. on Thursday.