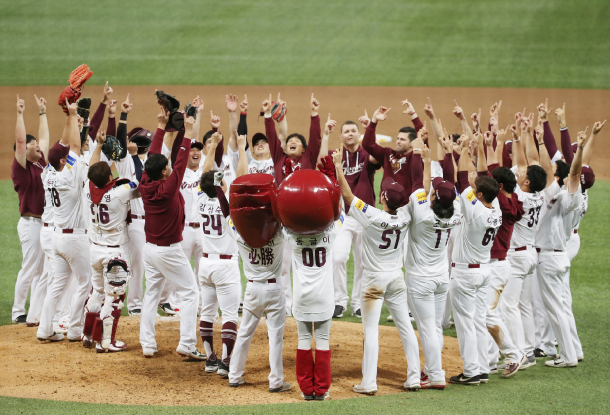 The Kiwoom Heroes celebrate after earning a spot in the 2019 Korean Series after tearing through the SK Wyverns in Game 3 of the KBO’s second round playoff series at Gocheok Sky Dome in western Seoul on Thursday. [YONHAP]

The Kiwoom Heroes earned a spot in the 2019 Korean Series after tearing through the SK Wyverns in Game 3 of the KBO’s second round playoff series at Gocheok Sky Dome on Thursday.

The Heroes entered Game 3 of the series — a series in which they were supposed to be the underdogs after finishing behind the Wyverns in the regular season — with a 2-0 lead.

Yet despite the Heroes’ recent dominance, for the first 15 minutes of the game it really looked like this one might go the Wyverns’ way.
At the top of the first inning, SK was able to quickly load the bases as the defensive Heroes seemed to struggle to find their feet. The Heroes managed to get out of that sticky spot, but neither team managed to produce anything for the first two innings.
Then, in the third inning, the Heroes woke up.

Kim Kyu-min started things off with a single. Wyverns’ starter Henry Sosa quickly struck out the next two batters, Kim Hye-seong and Seo Geon-chang, leaving the Heroes with two outs and a runner. A walk to Kim Ha-seong gave the Heroes two men on base, and Lee Jung-hoo converted that into two runs with a double.

Park Byung-ho then added another by bringing home Lee with a single, giving the Heroes a sudden, emphatic 3-0 lead.

The Heroes added another at the bottom of the fourth, before the Wyverns finally got onto the scoreboard with a single run at the top of the fifth.

SK’s one run wasn’t much of a consolation, as Kiwoom immediately picked up another five runs at the bottom of the fifth, adding one more at the bottom of the seventh to take a huge 10-1 victory. Kiwoom’s dramatic series sweep — 3-0, 8-7, 10-1 — saw them brush aside SK, the team that until a month ago had dominated the KBO for nearly the entire season.

“Everyone is in this together now, and during the course of a game, the guys follow every single pitch,” the Heroes manager Jang Jung-seok was quoted as saying on Yonhap. “It’s thanks to the veterans that we have this kind of culture. You’d be able to feel that if you just spent a few minutes in our dugout. I think I’ll just try to help things stay this way.”

Following the Heroes’ win, Lee was named the series MVP as he had a 0.533 batting average with eight hits and three RBIs.

“I’m glad we got to finish the series with three straight wins,” Lee said. “Rather than this being the end, we need to start over again. So I’ll forget about [winning the] playoff MVP and prepare for it again.”

“It’d mean even more if I win the Korean Series MVP, but I believe my teammates will step up,” Lee was quoted as saying on Yonhap. “I’ll just try to do my job.”

Lee’s performance this postseason is also quite a comeback. Last year, Lee ended his postseason campaign earlier than expected as he injured his shoulder during Game 2 of the first round of the playoffs. Due to this, the Heroes had to play the remaining postseason games without Lee.

“If our season ended today, then I would think that I made up for the disappointment and guilt [for not being able to help the team],” Lee said. “But we still have the Korean Series. I need to work harder.”

With a win, the Heroes advanced to the Korean Series for the first time since 2014, when the club finished runner-up to the Samsung Lions.

While the Heroes are now serious contenders for their first-ever Korean Series title, the Wyverns go home with some serious questions about their performance this year. The Incheon club dominated the KBO for nearly the entire season, holding on to the top spot from May 30 until the final week of the season, when the Doosan Bears took the lead and claimed the KBO pennant.

As recently as August, the Wyverns were a good nine games ahead of the Bears, but a disappointing September undermined months of hard work.

Due to this, the Wyverns failed to earn a ticket to the Korean Series and had to play in the second playoff round. Although they hoped to redeem themselves over the last week, instead they compounded their failure and raised serious questions over how the team that dominated the KBO for so long fell so far in such a short amount of time.

“We failed to score early and let the other team dictate the game,” Wyverns manager Youm Kyoung-youb was quoted as saying on Yonhap. “Whether it was pitching or hitting, Kiwoom was the better team the whole series.”

For the Heroes, the sweep was also a shot at redemption. Last year, the Wyverns and the Heroes faced each other in the second round of the playoffs, and the Heroes lost in the 10th inning of Game 5 to lose the series.

This year, the Heroes became only the eighth team in the KBO to sweep a playoff series.

Kiwoom will now be competing for the Korean Series title against Doosan.

For the Bears, this is the fifth straight time that the club has advanced to the Korean Series — only the third team to ever reach that milestone — but they haven’t won the title since 2016. They finished runner-up for the past two seasons, losing to the Kia Tigers in 2017 and to the Wyverns last year.

The Korean Series will be played in a best-of-seven format. The first two games, on Tuesday and Wednesday, will be played at Jamsil Baseball Stadium in southern Seoul, starting at 6:30 p.m. Then, after a break on Thursday, the next three games will be played at Gocheok Sky Dome in western Seoul. If the Series doesn’t end after Game 5, Game 6 and Game 7 will return to Jamsil.