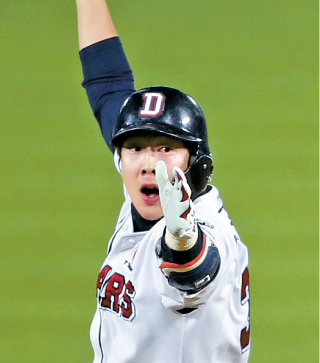 Park Kun-woo celebrates after hitting the winner at the bottom of the ninth inning at Jamsil Baseball Stadium in southern Seoul on Wednesday. [YONHAP]

The Doosan Bears picked up back-to-back wins against the Kiwoom Heroes to take a 2-0 lead in the Korean Series at Jamsil Baseball Stadium in southern Seoul.

In Game 2 on Wednesday, the Heroes got off to a great start as they quickly took a 2-0 lead by scoring a run each in the first two innings. The Heroes’ dominance didn’t last for long, as the Bears leveled the playing field with a two-run home run from Oh Jae-il at the bottom of the fourth.

After a scoreless fifth, the Heroes bounced back.

Jerry Sands quickly got on base to start the sixth inning. After a fly out from Lee Jung-hoo, Park Byung-ho hit a double to bring Sands home and took the score to 3-2. The Heroes didn’t stop there. After the Bears’ starter Lee Young-ha walked Kim Ha-seong, Song Sung-mun hit a single to bring Park home. Another single from Lee Ji-young took the score to 5-2.

Right when it seemed as if the Heroes were going to walk away with the game, the Bears started to pick things up at the bottom of the eighth inning.

The Heroes started the inning strong by striking out Bears catcher Lee Heung-ryun, but a single to Park Kun-woo and a walk to Jung Soo-bin quickly set the Bears up to make something happen.

Jose Fernandez hit a grounder which would have ended the inning, but as the Heroes’ Kim Hye-seong made an error, Park Kun-woo quickly ran home to pull one back and took the score to 5-3.

The Bears continued to fight back at the bottom of the ninth. Heo Kyoung-min started the inning off with a single, followed by a double from Bears captain Oh Jae-won to put runners on second and third with no outs.

The Heroes changed their pitcher from Oh Ju-won to Han Hyun-hee, hoping to finish the game, but it turned out to be a mistake. Han quickly gave up another single to Kim Jae-ho, bringing Heo home to take the score to 5-4. A sacrifice fly from Kim In-tae brought Oh home, tying the game at 5-5 with still only one out.

After a wild pitch from Han allowed the Bears’ pinch runner Ryu Ji-hyuk to reach second, Park Kun-woo stepped up to the plate to bring Ryu home for a dramatic 6-5 victory.

“I’m glad to have picked up come-from-behind victories for two straight days,” said Bears manager Kim Tae-hyung. “We’ve won both of our games at home and are now going to the away games. I think the good vibes are coming to us. We’ll play with more confidence at Gocheok.”

Before Park’s game-ending hit in the ninth, he had been struggling. But Kim said he never had any doubts.

“I couldn’t not send out Park Kun-woo because the timing of his batting isn’t bad,” Kim said. “I told him to be more confident and to trust it. I think he’ll get better from now on. Since Choi Joo-hwan wasn’t batting well, I sent out Oh Jae-won. As captain, Oh Jae-won hit an important one.”

Looking back at Game 1 on Tuesday, the Bears also picked up a dramatic win as they won at the bottom of the ninth inning. Entering the final inning tied 6-6, Oh Jae-il hit the winner to lead the Bears to a 7-6 victory.

Although the Heroes suffered losses in the first two games, manager Jang Jung-seok wasn’t too concerned.

“There were times where we were too late or too early in terms of the timing of changing the pitchers,” Jang said. “It was a mistake. Since Oh Ju-won’s been doing great as a closer, I used him without any second thoughts. I might change the order of our pitchers from now on. We can make mistakes in our defense. But it’s O.K. because they weren’t the mistakes that determined the win or the loss of the series.”

With two wins, the Bears are now only two games away from picking up the Korean Series trophy.

The Heroes have a long way to go if they want to take their first Korean Series title, as they now need to pick up four of the five remaining games.

If the series extends to Game 6, it’ll return to Jamsil Baseball Stadium on Tuesday.

For Game 3, the two clubs will turn to their foreign pitchers once again. The Bears will start Seth Frankoff, and the Heroes will start Jake Brigham.