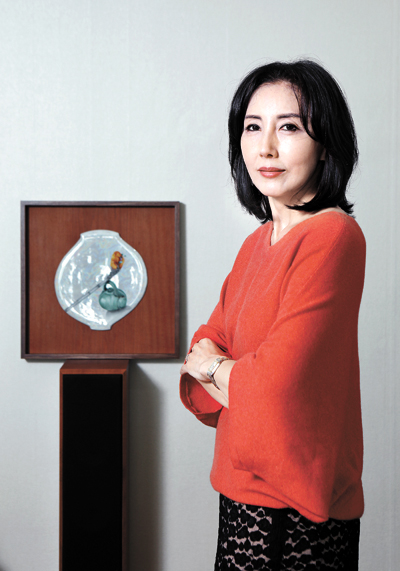 Traditional Korean white porcelain jars of the Joseon Dynasty (1392-1910), also known as “Moon Jars,” are supposed to be three-dimensional and pure white. Koreans, often called white-clad folks throughout history, adore this piece of white porcelain that is probably considered the best representation of traditional Korean artwork, for its simplicity and minimalism. But Korean artist Jeamin Seung fearlessly breaks that mold and makes all her white porcelain jars two-dimensional. Going a step further, she uses the flat jars as a canvas and paints colorful objects on them.

“I know some conservative Koreans may frown upon the thought of having brightly colored paints on an elegant white porcelain,” said Seung. “But I think such a transition of our white porcelain is necessary. I also am astonished by the 17th century moon jars’ beauty every time I see it, but at the same time, as a contemporary artist, I believe we have to develop and look for a ‘Koreanness’ in the contemporary context.”

When the Korea JoongAng Daily visited Seung’s workshop in Daechi-dong in Gangnam District, southern Seoul, on Thursday morning, she was carefully packing her fragile artworks into separate boxes to get ready for her upcoming solo exhibition at the Gallery Western in Los Angeles from Oct. 29 to Nov. 9.

“I am so excited to exhibit my works overseas,” Seung said, “but at the same time, I get so nervous that the artworks may break while traveling.”

Ever since Seung decided to focus on exhibiting her works abroad, her works became smaller in size so that she can pack them in her luggage instead of shipping them separately.

After Seung finished packing meticulously, she sat down for an interview to talk more about her artwork. The following are edited excerpts.

Seung also uses female torsos made in ceramic as her canvas to express her thoughts on feminism. [SEUNG JEA-MIN]

Q. Why did you pick white porcelain jars as your main material in the first place?

A. When Korea was hosting the G-20 summit in 2010, I was asked by the Blue House to come in and do an art demonstration in front of the foreign guests. I knew what I wanted to paint but didn’t know exactly on what. I wanted to show them something traditional. During that time, the Joseon Dynasty moon jars were in the limelight. Around that time, it was auctioned off at the Christie’s for tens of millions of dollars as I remember, so I decided to do an art demonstration on a white porcelain moon jar. That’s how it began. Because there are so many people painting on moon jars, I wanted to do something different - something that maintains Korean beauty but is at the same time contemporary.

Do you make your own white porcelain tiles?

Yes. As you know, before making a transition to fine art, my work used to focus on handcrafts. So I know this ceramic artist with whom I used to work with for a long time in Icheon, Gyeonggi. First I got a lot of help from him to bake these moon jar-shaped tiles at his work shop. Since I’m not a professional potter, the shapes are not as round and the surface sometimes ends up uneven. Some of them even have cracks. At first I thought I messed it up and that I should do it again. But consequentially, I realized that I am more satisfied with the ones that look imperfect in shape. It’s more like me. Nothing should be standardized in fine arts.

You paint a lot of pomegranates. Is there a reason?

My work primarily expresses two themes. One is maintaining and discovering Korean beauty in contemporary art. The other is showcasing the power and the beauty of women through the objects that I paint on the white porcelain. When I was working with handcrafts, I used to paint a lot of pictures of sacred subjects. While I was painting Sandro Botticelli’s “Madonna of the Pomegranate” on one of the pieces, I saw that the baby Jesus was holding the fruit. I learned then that the fruit is regarded as a sacred object and it often is used as a motif to represent the fertility of a woman. The fruit also appears in many Korean folk paintings known as minhwa.

I studied art history at Seoul National University, and when I went to the United States with my family, feminism became my field of interest, so I studied Women’s Studies at San Jose State University. Because my family had to move back to Korea, I had to give up my Ph.D. studies, but I am still very much interested in feminist issues. That is why I continue to paint objects that symbolize women, like pomegranates and traditional Korean accessories.

Through such objects, what are you trying to express?

I just want to put a spotlight on women - how beautiful, how great and how powerful they are. Many insist that countries like Korea are very economically advanced and that women are now quite free from gender discrimination, but I don’t think so. I still think that women suffer from gender inequality and so do many women in America. Perhaps it’s my influence, but my daughter is a Ph.D. student studying women’s history in the United States. We converse a lot about women’s issues and she tells me that there’s still a thick glass ceiling above American women.

I don’t want to approach and sound too radical, but I want to express through my artworks what an astonishing power it is for a woman to have - to be fertile. Being able to give birth to a child should not be an obstacle in advancing in the corporate world, but instead be regarded as competence and a power. I want to show that. That is why the other material I used to paint on is a female torso, also made in ceramic. I want this female body to be perceived not as a sexual object but as something beautiful and something all women should feel proud of. Whenever I express such thoughts through my works, I feel very alive and passionate.

Why did you make the transition from a handcraft artist to a fine artist?

I wanted to express my philosophy and thoughts through my art works, whether they are fine art or crafts. But the more and more I worked on crafts, I realized that they are regarded as objects rather than art. I wanted people to see the more creative side of my work. So I gave it a try and went to the CI-Contemporary Istanbul last year, which is an Istanbul art fair, and exhibited my works. The response was great. Because it’s a fine art fair, I think my pieces especially stood out. Most of the other works were on canvases, but mine used a different material. That successful exhibition at the fair led me to multiple exhibitions in other countries and I’ll also be holding another solo exhibition next January in Seoul.