Gorals bounce back from brink

Gorals bounce back from brink 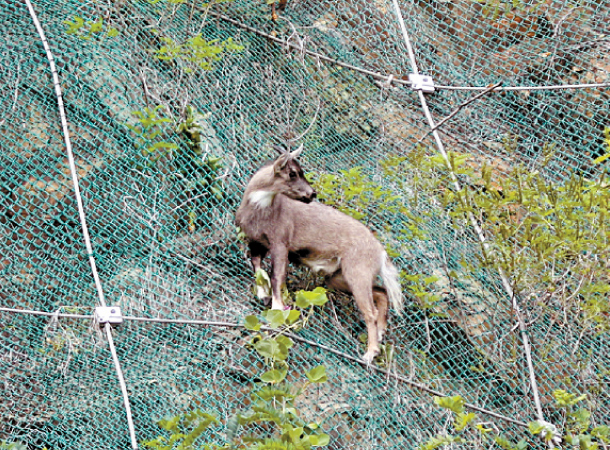 A long-tailed goral was found in Yongma Falls Park in Jungnang District, eastern Seoul, in June 2018. The Ministry of Environment had classified the goats as first-level endangered wild animals that are seriously at risk of extinction.

But it seems like the gorals have been slowly recovering their habitats in Korea.

Long-tailed gorals lived all over the country except its western coast until the 1950s. But thousands of gorals were captured in the 1960s, and their habitats were lost to urban development. In 1968, the species was designated as Korea’s natural monument No. 217 by Korea’s Cultural Heritage Administration.

According to the Cultural Heritage Administration, about 200 long-tailed gorals were living in Korea in 2000. In 2002, the Ministry of Environment estimated that 690 to 784 gorals were living all over the country. More than a hundred gorals were found in the demilitarized zone; Yanggu County, Hwacheon, Mount Seorak and Samcheok in Gangwon; and Uljin County and Bonghwa County in North Gyeongsang.

Those are remote places, often mountainous. But then in 2008, it was discovered that the long-tailed gorals were living on Mount Odae, which is popular with hikers. In the autumn of 2010, a goral was hit by a car and found injured on a road near Mount Songni, North Chungcheong. More were found on Mount Chilbo, North Gyeongsang, in 2011 and in Yeongwol County and Chuncheon, both in Gangwon, in 2013 and furthermore in Juwangsan National Park, North Gyeongsang, in 2017 as well.

Then in June 2018, Yongma Falls Park football field manager Kang Kyeong-roh told the Species Restoration Technology Institute of the Korea National Park Service that he saw a goral. After performing a field investigation, Park Service experts confirmed that a male long-tailed goral was living in the park. Also, through a genetic analysis of droppings, they discovered that a female goral was also living in the park.

Many wondered how the gorals came all the way to Seoul. Based on the fact that a long-tailed goral was found in Pocheon, Gyeonggi, in July 2018 and its image was caught on an unmanned camera on Mount Yeonin, Gyeonggi, this year, some experts assume that the gorals left Hwacheon County and passed Pocheon and Gapyeong County, both in Gyeonggi, before finally arriving in Seoul. The route would have been blocked by the Bukbu Expressway, which is in between Gyeonggi and Seoul. But a bridge that connects military units, which is located in Guri, Gyeonggi, might have been used by the animals, experts believe.

A center for long-tailed goral conservation was established in Yanggu County in 2007. The Ministry of Environment and the Korea National Park Service have been regularly releasing gorals on Mount Worak. The released long-tailed gorals were either the animals the center had been protecting or the newly born.

However, the fate of the long-tailed gorals is still uncertain. There are remaining risks of them being poached, killed on the road or killed by weather disasters. Also, its population growth will be slow: The goral gives birth only once a year.

A farmer in his 60s was caught illegally poaching a long-tailed goral in Bonghwa County in 2005. Also, a goral caught in a snare was found in Pocheon in 2013 as well.

Experts say the long-tailed gorals, unlike elks and roe deer, usually hide under rocks during snowstorms and starve to death. When there is over 30 centimeters (12 inches) of snow, they are not able to move easily and often perish.

A total of 22 long-tailed gorals were killed by snow on a mountain in the Baekdudaegan range in North Gyeongsang from March to April 2010. Also, eight gorals were found dead in a snowstorm on Korea’s eastern coast from late 2011 to early 2012.

“Since the investigations of long-tailed gorals were not done systemically in the past, we couldn’t make a conclusion that the number of them is actually increasing,” said Jo Yeong-seok, a researcher from the Animal Resource Division of the National Institute of Biological Resources. “We plan to complete a map that will allow us to figure out the habitats of the gorals by this year, and through it, the actual population will be confirmed.”