An Se-young may just be the future of Korean women’s badminton. 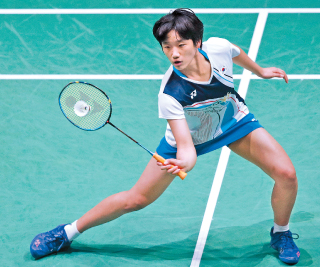 An Se-young competes in the final against Carolina Marin of Spain at the 2019 French Open in Paris on Sunday. [EPA/YONHAP]

Having made her debut on the senior stage just last year, An’s performance this year quickly made headlines. This year, An won four Badminton World Federation (BWF) events with one runner-up finish, giving her a huge boost in the world rankings.

Most recently on Sunday, An picked up her fourth win on the BWF World Tour at the French Open. In the finals, An defeated No. 17 Carolina Marin of Spain 16-21, 21-18 and 21-5 at Stade Pierre de Coubertin in Paris. An is currently ranked at No. 16.

An lost her first set but fought back by winning the second and third for a come-from behind victory.

Although Marin and An have similar world rankings, the Spanish player wasn’t an easy opponent as she won gold in the women’s singles at the 2016 Rio Olympics. Marin’s world ranking dropped due to a right knee injury in January, but her performance has improved recently, as she won the China Open immediately before the French Open.

An has now won four events this year - the New Zealand Open, Canada Open, Akita Masters and French Open - as well as picking up a runner-up finish at the Hyderabad Open.

The win at the French Open is an especially impressive achievement as the field had a number of higher ranked players.

On route to the final, An defeated the eighth ranked Saina Nehwal of India in the quarterfinals and second ranked Akane Yamaguchi of Japan in the semifinals in straight sets.

“My tempo in the first set of the match was too fast,” An said. “During the break, my coach told me to go slowly and I tried to be calm in the remaining game. I worked really hard for the win, so I’m really happy to have achieved it. My strength is my age. Since I’m young, I’m not afraid of anything.”

An started badminton in her first year of elementary school, when her parents played as a hobby. She quickly proved to be a prodigy. Since An was taller than most players her age, she used that to her advantage. Standing at 1.69 meters (5 foot, 7 inches), she quickly topped the junior ranking in Korea. For five straight years, from 2013 to 2017, An won the women’s singles event at the Yonex Korea Junior Open.

Then, in December 2017 when An was only in middle school, she was added to the senior national badminton team, becoming the first middle school student ever to qualify.

An competed at the 2018 Asian Games in Jakarta-Palembang, but faced an early exit by getting eliminated in the round of 32. Following the Asian Games, An won all nine of her matches in the national team qualifier in December last year to retain her spot on the team.

This year, she’s shaken up the world of badminton. Her wins were good enough to see her jump from No. 99 in the world to No. 16 in less than a year.

An has now become a player to look out for at the upcoming Tokyo Olympics.

Korean badminton may not be the best in the world, but they’ve managed to win a medal or two at the Olympics. At the Rio Games, the Korean badminton team has appeared less competitive, only managing to win one bronze medal. Things got worse when the country finished with no medals at the 2018 Asian Games in Jakarta-Palembang.

Korea also failed to win a medal at the world championship in August this year. But with An’s momentum this year, she could be the player to raise the status of the sport and bring back some success.

In women’s singles, An’s event, the Korean team has only ever won two Olympic medals - a gold and a silver - both by Bang Soo-hyun. Bang first picked up a silver at the 1992 Games in Barcelona, and four years later she won Korea’s first gold in women’s singles in Atlanta.

“My biggest dream is to win a medal at the Tokyo Olympics,” An said.