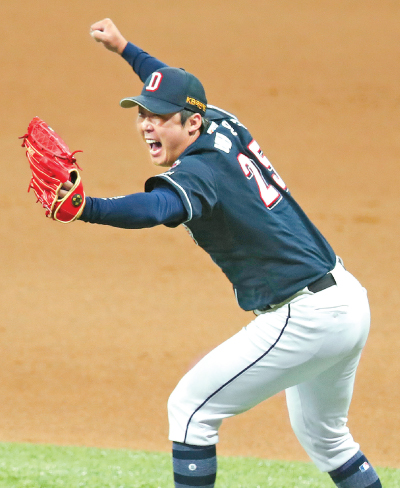 Bae Young-soo of the Doosan Bears celebrates after the last out count to win the 2019 Korean Series at Gocheok Sky Dome in western Seoul on Saturday. [YONHAP]

Bae’s appearance on the mound on Saturday was so unexpected that even Doosan Bears manager Kim Tae-hyung didn’t know it was going to happen.

While the Bears were leading the Kiwoom Heroes 11-9 at the bottom of the 10th inning, Kim visited the mound to check on Bears pitcher Lee Yong-chan, as he was about to face the powerful bats of Park Byung-ho and Jerry Sands. Since the Bears only needed two more outs to take home the Korean Series trophy, Kim wasn’t planning to change the pitcher. But, due to a misunderstanding with the umpire who thought Kim had triggered a pitcher change, the Bears were forced to pull Lee out of the game and bring in Bae.

This was Bae’s first appearance in the Korean Series this year.

Despite the misunderstanding, Bae proved more than capable of finishing the job. The veteran pitcher stepped on to the mound and very quickly struck Park out and grounded Sands out to lead the Bears to their sixth Korean Series title.

Bae’s heroic appearance to end the Korean Series made it seem like he still had a few seasons left in him, but the veteran decided it was time to call it a day. He informed his teammates and coaches about his decision over dinner on Monday.

“I pitched in the final game of the Korean Series, and I think this is a message from above that my time has come,” Bae was quoted as saying on Yonhap. “I have no regrets whatsoever.”

“Before the Korean Series began, I told my wife I felt like this would be my last one,” Bae was quoted as saying. “And when I came home after we won the title, she got really emotional, knowing what I’d gone through. I think I finished my career the way I wanted to.”

Once the Series ended, Kim asked Bae to consider being a playing coach, but Bae declined. For now, he said he wants to rest without having to think about his future plans.

“Right now, I just want to relax and not think about anything else,” he was quoted as saying. “Now that I’ve decided to retire, I don’t even want to exercise. I’ll be spending time with my family.”

Bae had the best season of his career in 2004, picking up 17 wins and two losses with a 2.61 ERA. This was good enough for Bae to win both regular season MVP and Korean Series MVP. In Game 4 of the 2004 Korean Series, Bae pitched a no-hit, no-run game until the 10th inning. However, as the two teams failed to score a run until the 12th inning, it ended in a 0-0 draw.

Bae’s career wasn’t all plain-sailing. Just like many other pitchers, Bae had to undergo elbow surgery, missing the entire 2007 season. Once he returned, there was a noticeable drop in the speed of his pitches.

After playing for the Lions until 2014, Bae signed with the Hanwha Eagles to continue his career.

Once the 2018 season ended, the Eagles suggested Bae retire, but the Bears gave him one last chance. Throughout the 2019 season, Bae appeared as the Bears’ bullpen pitcher and picked up a win and two losses with a 4.57 ERA in 37 games.

“It’s a huge honor for me to be able to go out on my terms, after winning the Korean Series title,” Bae was quoted as saying. “I want to thank the fans of all the teams I’ve played for. Every time I have an opportunity to show my appreciation, I’ll do that.”

With 138 wins, Bae beats any currently active pitcher in the KBO and ranks fifth in all-time wins.