After years of coaching in the KBO, Her Mun-hoe has landed his first managerial job with the Lotte Giants. 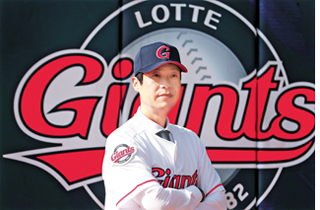 Lotte Giants manager Her Mun-hoe poses in front of the club’s logo at Sajik Baseball Stadium in Busan during his inauguration ceremony on Friday. [YONHAP]

And at his inaugural press conference Friday, the 47-year-old spoke at length about his leadership philosophy, saying there won’t be any reign of terror on the bench during his tenure.

“I’ll consider myself a partner with these players, and I hope they’ll find me approachable,” Her said at Sajik Baseball Stadium in Busan. “Managers and players are all in the same boat. And I want to build a team where everyone can communicate and cooperate with each other. I think yelling at players is the easiest thing to do. I am not that type of coach.”

Her agreed to a three-year deal with 750 million won ($640,000) in total salary and 300 million won as a signing bonus last Sunday, a day after his former team, the Kiwoom Heroes, lost in the Korean Series to the Doosan Bears.

Her had been the Heroes’ bench coach since May last year. Before that, he served as a hitting coach for the LG Twins.

Taking over the Giants is a homecoming for Her, who was born and raised in the club’s home city of Busan. He played 10 seasons in the KBO, including the 2001 and 2002 seasons with the Giants.

The Giants went through two managers as they finished dead last in 2019, with a record of 48-93-3 (wins-losses-ties). First-year manager Yang Sang-moon stepped down in July, and bench coach Kong Pill-sung served as interim manager for the rest of the season.

Her said he hopes to create an environment that will allow players to compete for themselves and not anyone else.

“I think there will be progress if we don’t put too much pressure on these players,” Her said. “If they play for others, they will be tentative and passive on the field. They have to start playing for their own good.”

Her said physical conditioning and mental fortitude are two other pillars of his managerial philosophy.

“The most important thing for the players is to stay in great shape and to be technically sound,” Her said. “Once they have that foundation, they can work on their mental side of the game.”

Asked what he thought about the Giants this past season from the perspective of an opposing coach, Her said, “I don’t think anyone expected this team to fall to last place. But if we can tweak the mindset of the team, I think we’ll be a pretty good club.”

The Giants have an aging core with a shallow pool of young prospects. Her said he’s only here to win ball games, not to develop young players.

“I don’t think I can do both, and I want to focus on the present rather than worry about the future,” he said. “I don’t care about the ages of my players. I won’t put young players in the lineup just to help them develop, unless they put in the work to warrant playing time.”

Her said he’d turned down coaching offers from other clubs in the past because he didn’t think they were the right fit for him in terms of his leadership and coaching philosophies.

He said he felt he got the Giants job because he was being himself in the interview without trying to impress the higher-ups.

“Baseball is a mental game, and you shouldn’t make things complicated,” he said. “I’ve always thought about how to run the team efficiently. If we do our best in each and every game, I think a postseason berth and even a Korean Series title will follow.”