Jang Ha-na announced Tuesday that she has decided not to join the LPGA Tour next season. 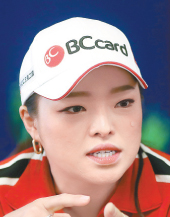 On Oct. 27, Jang won the LPGA Tour’s inaugural BMW Ladies Championship in Busan. Jang defeated Danielle Kang of the United States in the third playoff hole to become the inaugural champion. Since Jang won the tournament as a non-LPGA Tour member, she was given the option to re-join the LPGA Tour for the 2020 season.

“After thinking about this with my family, I will not be heading to the LPGA Tour,” Jang said through her sponsor BC Card.

Her victory in Busan was the first time since the ISPS Handa Women’s Australian Open in February 2017 that Jang has won an LPGA Tour event.

Throughout her career, Jang has picked up 11 wins on the KLPGA Tour and five on the LPGA Tour.

“My parents have been with me all the time and they’ve been a great strength to me,” Jang said. “So rather than going to the LPGA Tour, I want to spend more time with my family.”

Just as in the past two seasons, Jang will continue to play on the KLPGA Tour, but she may appear at some LPGA events.