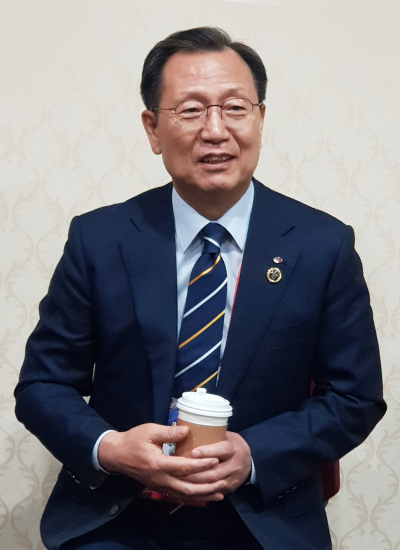 GWANGJU - Korea Electric Power (Kepco) CEO Kim Jong-kap expects the utility company to be in the black in the third quarter after three consecutive quarters of losses, although the outlook remains dim for the entire year.

The increased use of electricity during the summer this year is expected to have lifted the company from its recent woes.

“Even during difficult times, we were in the black in the third quarter,” explained Kim at the Bitgaram International Exposition of Electric Power Technology (Bixpo) on Wednesday in Gwangju.

The CEO’s expectations for the quarter are in line with analyst estimates.

According to analyst forecasts compiled by data tracker FnGuide, Kepco is expected to record an operating profit of 1.5 trillion won in the third quarter.

The company could even receive government support of 100.8 billion won for the 280 billion won in discounts it gave for electric bills this summer, but the funds are currently pending approval from the National Assembly.

Kim, however, stressed that the company still faces difficulties with high fuel prices, keeping a dim outlook on the company’s overall performance for the year.

“It depends on the direction of fuel prices and the currency,” explained the CEO. “In the current situation, this year is more difficult than last year.”

“Fuel prices are much more expensive than they were two to three years ago,” added Kim. “It is difficult to predict whether they will go down in the near future.”

The industry veteran also addressed the controversy surrounding reducing nuclear power plant operation rate due to maintenance, which has coincided with the current administration’s policy to reduce reliance on the energy source.

“It would be better for us if we fix and run the Hanbit, 1, 3 and 4 [nuclear plants] and the operation rate rises.”

The operation rate for Kepco’s nuclear power plants is expected to pick up next year to 80 percent, up 9.6 percentage points from this year, according to a report by Yoo Jae-seon, an analyst at Hana Financial Investment.

Kepco also faces controversy over special discounts in its electric billing system, which is scheduled to be phased out in December.

Kim said the company will discuss the move with lawmakers and the government before it is actually implemented, but warned that further pressure on the utility company’s finances by maintaining low electricity costs would eventually harm the public.

“If the public decides to pay less now and more in five years, there’s nothing we can do about it,” said the CEO. “If debt continues to mount and our borrowing situation worsens in the long run, it will all go back to burden the public.”

Kepco’s total debt as of last year stood at 114.2 trillion won, 5.3 trillion won higher than in 2017. Hana Financial expects the company’s debt to rise to 124.6 trillion won this year.