Jo Adell, one of the top prospects in the MLB on the cusp of reaching “The Show,” has brought his big bat to the Olympic qualifying tournament in Tokyo. 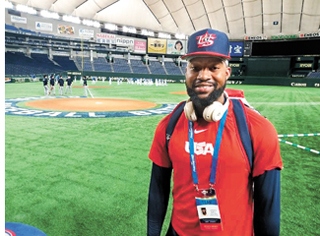 But the American outfielder has learned that sometimes, small things count the most.

“[My takeaway is] definitely that little things matter a lot,” Adell told Yonhap News Agency on Thursday after the official U.S. practice at Tokyo Dome during the World Baseball Softball Confederation (WBSC) Premier12. “I think we fell short in a couple of games where, if we would have done some of the little things a little bit better, the outcome might have been different. I think, moving into next year, I am really going to keep the focus on making sure little things are done the right way.”

Adell, 20, has been ranked baseball’s No. 1 prospect by MLB Pipeline, which rates minor league stars for MLB.com. The Los Angeles Angels’ first-round pick from the 2017 draft began the 2019 season in high Single-A and reached Triple-A in August. Despite suffering hamstring and ankle injuries in spring training that kept him out for 10 weeks, Adell batted .289/.359/.475 with 10 home runs, 36 RBIs and 27 doubles in 76 minor league games.

Adell will likely make his major league debut next year, but the Angels don’t have to add him to their 40-man roster until they feel he’s right on the verge of reaching the bigs. And that exclusion made Adell available for the Premier12, where those on 40-man rosters aren’t eligible to play.

And though the U.S. team has struggled to a 2-3 record in the Super Round by defeating Chinese Taipei 3-2 on Friday, the Americans must be glad they have Adell. He leads the team with 11 hits and 18 total bases and is tied for second place for the United States with two home runs. He’s hitting .379/.419/.621.

Facing Korea on Monday, Adell paced the U.S. offense with a three-hit effort from the leadoff spot, though his team fell 5-1.

It’s that kind of energy from the top of the order that Adell said he can bring to the veteran team as its youngest player.

“I consider myself a little bit of a spark plug out here,” he said. “The more energy that I bring, I think the team feeds off it. [I’ve been] just playing my role and [doing] whatever I can do to help the team — move runners, make plays in the outfield and steal, whatever it may be.”

Adell said he’s tried to pick the brains of the older players, including those who play different positions.

“I’ve learned a lot about my game, looking at other guys play, seeing some guys go about their business and things they do well,” Adell said. “Even talking to a lot of older pitchers about what they do helps me in the box as well. Really, just being around the coaching staff, it’s been a huge learning experience.”