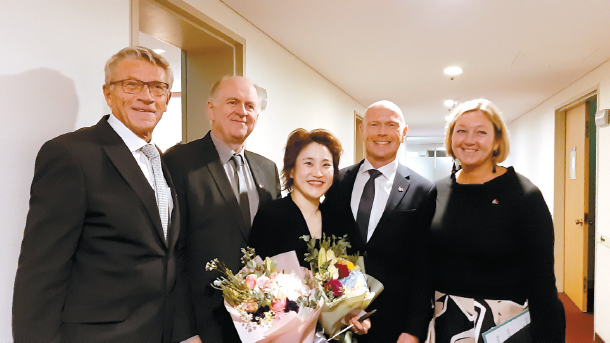 From left, Milian Myraunet, chairman of the board of the Trondheim Symphony Orchestra; Roar Leinan, the orchestra’s managing director; Chang Han-na, conductor of the orchestra; Norwegian Ambassador to Korea Frode Solberg and his wife Herta Solberg, celebrate the first performance of the orchestra in Seoul Wednesday. [EMBASSY OF NORWAY TO KOREA]

It was the first time the orchestra had a Korean conductor. Yet by the way they performed in Seoul on Wednesday night, it was as if they had been together for ages.

Chang Han-na, the cellist-turned-conductor from Korea, conducted with such fine-tuned energy that she seemed to draw a range of emotions from the Trondheim Symphony Orchestra at the Seoul Arts Center in southern Seoul on Wednesday evening.

“It’s been a while,” she told the audience in a short intermission before conducting Edvard Grieg’s “In the Hall of the Mountain King” for an encore. “I am glad and honored to be here.”

Chang and the Trondheim Symphony Orchestra have been together since September 2017. This was the first time they performed in Seoul. Chang and the orchestra are touring Korea through Sunday. Having performed additionally in Busan on Thursday, they are scheduled to hold concerts in Daegu this evening and Iksan on Sunday.

The orchestra is performing Grieg’s “Peer Gynt Suite No. 1, Op. 46” — music composed at the request of Norwegian playwright Henrik Ibsen — and “Piano Concerto in A minor, Op. 16.” Korean pianist Lim Dong-hyek is the soloist for the piano concerto, which incorporates characteristics of Norwegian folk music.

The orchestra is also performing Tchaikovsky’s “Symphony No. 6 in B minor, Op. 74,” also called the Pathetique Symphony.
Perhaps more potent because it was unspoken, the mood of death overpowered the hall at the end of the orchestra’s performance of the symphony on Wednesday evening.

“It is the hope and goal of the orchestra that every one of us will make one sound together,” Chang told the press at a press conference hosted in Seoul on Monday. “That we will express that one emotion together so powerfully so that the person who sits at the way back of the concert hall can be hit with it and be overwhelmed.”

“It’s a big project to perform in another country, and many people have worked hard to bring it about,” said Roar Leinan, the Trondheim Symphony Orchestra’s managing director. “We were very happy three years ago when we succeeded to engage Han-na Chang as chief conductor and lead artistic leader in Trondheim. She is a great inspiration. We in the orchestra feel as if we are coming home [to perform here] even though we have not been here before, because of our relationship with Han-na.”

“This year we are celebrating 60 years of relations with Korea, and it has been an important year for this special relationship,” said Frode Solberg, ambassador of Norway to Korea. “We had an exhibition earlier this year to mark Normash, the field hospital that Norway ran in Korea in 1951, and Korean President Moon Jae-in had a state visit to Norway as well. And now we are here marking the year’s end with another highlight of our cooperation as artists from Norway and Korea perform together.”