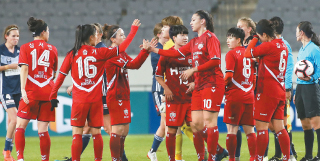 The two teams appeared to be fairly even for the first 20 minutes of the game, with both Incheon and Melbourne narrowly missing some good opportunities in the early going.

Things started to unravel in the 24th minute, when Incheon found the back of the net with a goal from Kim Dam-bi, followed quickly by another from Brazilian Thais Guedes in the 33rd minute.

Despite the early success, it was the second half that really saw Incheon run away with the game, when midfielder Lee Sea-eun managed the improbable feat of finding the net twice in two minutes.

Lee first took the score to 3-0 in the 57th minute, hammering in an impressive free kick, before immediately following up in the 58th minute to take the score to 4-0.

The last 30 minutes of the game were fairly uneventful, with Grace Maher narrowly missing a consolation goal for Melbourne in injury time.

The win on opening day takes Incheon straight to the top of the table in the four-team tournament, while Melbourne stumbles to the bottom. Jiangsu Suning Ladies FC and Nippon Tv Beleza are tied in second place, having ended their match, also at Yongin Citizen Athletic Park Stadium, with a 1-1 draw.

As the game between Jiangsu and Nippon took place earlier in the day, Jiangsu’s Tabitha Chawinga scored the first-ever goal at the AFC Women’s Club Championship, followed quickly by Nippon’s Mina Tanaka.

The inaugural edition of the AFC Women’s Club Championship sees the top club from Korea, Australia, China and Japan face off in a round-robin tournament.

Melbourne joins the tournament after topping Australia’s W-League for the 2018-19 season, Nippon has topped Japan’s Nadeshiko League for the last five years, Jiangsu won the 2019 season in China’s Women’s Super League and Incheon are the reigning champions in the WK League.

The final round of matches will be played on Saturday, with Melbourne taking on Nippon at 12:00 p.m. and Incheon taking on Jiangsu at 3:15 p.m. The inaugural winner of the tournament will be crowned after the final game.

All matches will be held at Yongin Citizen Athletic Park Stadium.