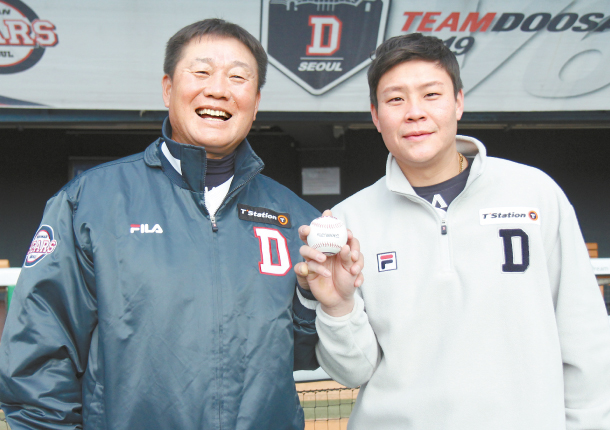 The Doosan Bears’ domination in the Korean Series this year also saw the rise of another father-son championship duo.

After catcher Yang Eui-ji signed his free agent contract with the NC Dinos at the end of the 2018 season, Park Sei-hyok earned his spot as the Bears’ starting catcher this season. Despite the concerns over the loss of Yang, Park successfully fulfilled his role with a 0.279 batting average with 63 RBIs and 123 hits throughout 137 games.

Although the numbers might not make him the best batter in the lineup, for a catcher, they’re impressive. He’s also received quite some attention for his accurate batting and speed. Throughout the season, he’s had 19 doubles and nine triples, the second highest in the league and the best among catchers.

During the Korean Series, he was even more threatening as he had a 0.417 batting average. Following his performance, Park was named as one of two finalists for Korean Series MVP. Oh Jae-il ultimately won the award, and Park just missed out on becoming the younger half of the league’s first-ever father-son duo to both own a Korean Series MVP trophy.

Park’s father, Park Cheol-u, was a dominant player back in the 1980s. The elder Park mostly played as a first baseman and designated hitter. In 1989, when the Haitai Tigers won the Korean Series, Park Cheol-u was named the championship MVP.

Although the shared MVP experience didn’t pan out this year, the two Parks did get to enjoy the experience of winning both the regular season and the Korean Series together this year.

Park Sei-hyok plays for the Bears and Park Cheol-u is never far away, as a member of the Bears coaching staff. Up until the first half of the season, Park Cheol-u served as the Bears’ batting coach, and now he is the Bears’ Futures League team manager.

Below are edited excerpts of an interview the pair had with the JoongAng Ilbo.

Q. Back in 1989, Park Cheol-u was named the Korean Series MVP, and 30 years later Park Sei-hyok performed well enough to very nearly take the title. How do you guys feel?

A. Park Cheol-u: I got married in February 1989. I was struggling with injuries throughout the 1987 and 1988 seasons. But I met my wife, and everything started getting better. Three months after I was named the Korean Series MVP, Sei-hyok was born. He’s my lucky charm.

Park Sei-hyok: I was really lucky this year because I became a starting catcher and got to experience the regular season and the championship victory. [After Yang Eui-ji left,] a lot of people were concerned, so I really wanted to win. I didn’t have time to think about winning MVP as well.

Park Cheol-u: Actually, it was a good thing that Sei-hyok didn’t win the MVP title, because it’s not good to become too famous too soon. This will allow him to come up with another goal and develop into a better player. Back when I was with Haitai [now the Kia Tigers], our veterans pushed down the players that were likely to become stars. You only become a real star after you survive all that.

Park Sei-hyok is continuing the baseball family tradition. Is your father the biggest influence behind you starting baseball?

Park Sei-hyok: Since I was little, I watched my father play baseball. When he came home, he only watched baseball, so I naturally started to like baseball. I joined the baseball team in fourth grade in elementary school [while attending Seoul Suyu Elementary School], and I really enjoyed throwing and hitting baseballs, but I didn’t think I had more talent than other people.

Park Cheol-u: Back in our time, baseball was a rough sport. We played because it put food on the table. When Sei-hyok said he’s playing baseball, my wife didn’t like it. But I didn’t stop him. I told him to do what he wants to do.

Catcher is probably the toughest position to play and has a lot of pressure. Park Sei-hyok - what made you want to be a catcher, and did your father ever disagree with your decision?

Park Sei-hyok: Late catcher Lee Doo-hwan was an amazing catcher. I wanted to be like him because he looked so cool.

Park Cheol-u: When he said he wanted to become a catcher, I encouraged him. It’s a difficult position, but that means it’s more valuable and there is more potential to become a coach.

Both of you bat left-handed. Is this an inherited trait?

Park Sei-hyok: I’m actually right-handed. When I was in middle school, coaches suggested I bat left-handed. At the time, throwing right and batting left was a trend because of Ichiro Suzuki [of Japan]. Also, during that time, there weren’t that many catchers who bat left-handed. I think it was a good decision.

Park Cheol-u: When Sei-hyok batted right-handed, he had a big swing arc and had some power to it. Once he started batting left-handed, he’s gotten more accurate, similar to when I was a player.

Wasn’t it uncomfortable playing and coaching for the same team?

Park Cheol-u: Now, I’m the manager of the Bears’ Futures League team, but back when I was with the Bears [as the batting coach], I’d be lying if I said I didn’t think about him. But the more I felt that awkwardness, the more I tried to ignore it. I didn’t ask other players about Sei-hyok, and I didn’t ask Sei-hyok about other players. And they were great with keeping his secrets among themselves.

Park Sei-hyok: I started baseball after watching my father play, so the spotlight of being “Park Cheol-u’s son” was something I always had to bear. There was nothing I felt uncomfortable about for being on the same team with my father. [Just like my father,] I can be a heavy drinker, but during the season, I don’t really drink. I relieve my stress by drinking coffee and chatting with my teammates.

What part of your son resembles you the most?

Park Cheol-u: I don’t think he inherited anything from me! One thing I might have given him is his positive personality. It makes me feel great when I hear from other people that Sei-hyok knows how to respect older teammates [or coaches]. Now, Sei-hyok is no longer “Park Cheol-u’s son.” Instead, I’ve become “Park Sei-hyok’s father.”

Park Sei-hyok: I am playing baseball due to the influence of my father. I’ve inherited everything from him, both physically and mentally. I want to be a better baseball player and better son.