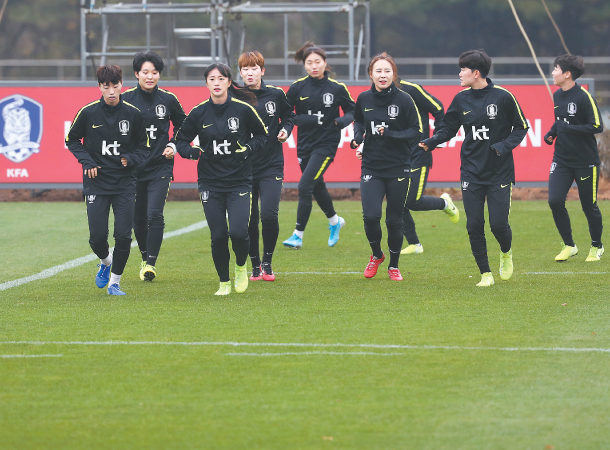 In this photo from Nov. 15, the Korean women’s football team trains at the National Football Center in Paju, Gyeonggi. [YONHAP]

Coached by Colin Bell, Korea will face China, Chinese Taipei and Japan during the East Asian Football Federation (EAFF) E-1 Championship in Busan. The tournament kicks off next Tuesday and will run through Dec. 17 for the women and Dec. 18 for the men.

With foreign clubs not obliged to release their Korean players for this tournament, which isn’t part of FIFA’s international match calendar, Bell will be without usual mainstays such as Ji So-yun of Chelsea FC Women, Cho So-hyun of West Ham United FC Women and Lee Geum-min of Manchester City Women’s FC.

Instead, Bell filled his team almost entirely with players from the domestic semi-pro league, the WK League.

The lone exception is the 19-year-old collegiate forward Chu Hyo-ju, who excelled on the U-19 national team during the Asian Football Confederation (AFC) U-19 Women’s Championship. This is Chu’s first selection for the senior team.

Yeo Min-ji, a former U-17 star who has overcome a string of injuries and found a new gear, is one of six forwards.

There will be some new faces in goal for Bell, who will take Yun Young-geul, Oh Eun-ah and Jeon Ha-neul. Oh and Jeon have never played for the senior national team - they have made six appearances combined for the U-20 team - while Yun, the veteran of the trio at age 32, has just 14 caps with the senior squad.

Bell had been training with national team candidates since Nov. 15 before making his final cuts on Wednesday.

The Korea Football Association said Bell’s squad will open camp in Ulsan, just north of Busan, on Friday and then move to the tournament host city two days later.